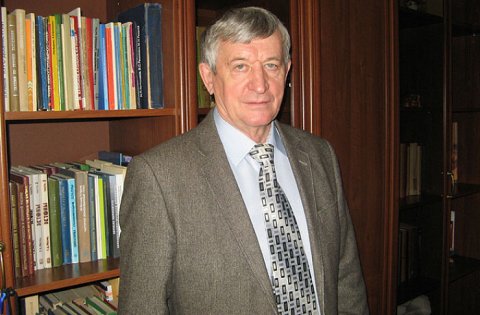 Professor of the Department of Computer Modeling and Nanotechnologies of the SUSU Faculty of Physics, Doctor of Sciences (Physics and Mathematics), Alexander Yalovets, spoke to us about the possibilities opened up by this innovative technology.

— Where did this idea come from?

— Everything began back in the 50s when researchers in the Soviet Union and the USA having understood the dangers of nuclear testing began to try to laboratory model the processes occurring in nuclear detonation using charged particle accelerators. This required creation of powerful electrophysical stations capable of shooting highly powerful beams of fast electrons with extremely dense currents. Although kinetic energy of such electrons is much smaller than in a collider or synchrophasotron, their power per area unit of the beam is hundreds and thousands of megawatts per square centimeter.

In the 80s, strong electrical beams, and later ionic and plasma beams, were being used to create high-strength materials. Here we speak of the effect of energy currents on matter, which changes its structure. Electrical, ionic, and plasma beams pierce material at incredible speed, and the material begins to melt at an extremely high temperature. The time of this action is almost insignificant – tenths of a nanosecond, but the material gains entirely new properties.

— For this, newest equipment was necessary, capable of creating conditions similar to the processes occurring within stars?

— We have gained new possibilities recently. We purchased a unique stand called RITM-M, created by the Institute of High Current Electronics, Siberian Branch, Russian Academy of Sciences (Tomsk). The heart of it is a high current electrical accelerator and two magnetrons: we irradiate a film sprayed on the base material and obtain a high-strength coating.

In addition, our scientists have created a plasma beam for studying highly powerful energy currents. This is the development by Candidate of Sciences (Physics and Mathematics) Artem Leyvi (currently writing his doctoral dissertation on this topic). This unique device generates a compressed plasma beam and makes it possible to complete experiments on the beam’s effect on matter.

— What happens to the material being fired at?

— Under the effects of stellar temperatures, the upper layer melts and the microstructure and phase constitution of alloys consisting of various elements change, homogenization occurs, and it becomes more uniform. And the crystals which the metal consists of become smaller, which is important for increasing material strength.

To obtain materials with the required properties, we must find the optimal level of energy treatment. To speed up our selection, we use computer simulation of these difficult processes to determine the final result. Energy transfer is calculated at the atomic level, where the laws of quantum mechanics of the microworld are in effect.

Let’s Level out the Craters!

— And there are some problems with this?

— The problem is that we often see certain unwanted effects, the origin of which has remained a secret up until now. Craters appear on the surface of material which damage its strength. We have created a theory of the appearance of these craters. It turns out, that during thermal expansion of metal, its upper layer accelerates its attempting to meet the electron beam. And since the force of inertia is directed “inwards”, gravitational waves appear on the surface of the molten metal, similar to waves on water. When the energy beam is turned off, a certain kind of weightlessness appears, and the conditions necessary for Richtmyer-Meshkov instability are created, where one medium penetrates the other. This is what results in forming of craters.

We have found a solution for this as well. The metal surface smooths out if you choose the necessary, softer mode for irradiating with a plasma or electron beam!

— But an ideal, smooth surface isn’t always an advantage…

— We registered a curious effect. In irradiating the “target” with a plasma impulse, an undulating surface appears. As we found out, molten metal flows across it with fast deceleration, elastic energy accumulates, and the ring deforms. It might seem that this is a minus, but, as experiments have shown, the wave worked out as an advantage! If you lay a coating on this base with the magnetron sputtering technique and treat it with an electron beam, you obtain a smooth surface which holds well on a different metal.

— And what about metallic ceramics and composites?

— Our postgraduate student Natalya Dyuryagina developed a theoretical model of electrophysical properties for nanocomposite materials. The model makes it possible to describe electrical conductivity of such materials, their optical characteristics depending on the nanoparticle materials, their concentration, and their size. Based on the developed theory, we study radiation effects on various nanocomposite materials.

It turns out that radiation conductivity of such materials increases significantly and gains completely new characteristics! The main value of this research is that it makes it possible to understand the nature of processes occurring in nanocomposites and experimentally explain observed effects.

In addition, we study the effects of intense beams of energy on composite materials. The main goal of this research is to determine the possibility of creating materials with high radioactive resistance.

— Where can your methods find practical application? And what does this offer?

— Pulsed annealing of materials makes it possible to create materials of the future and determine their characteristics. Durability of a cutting instrument with this coating increases by 2-5 times, and reliability of parts under friction, for example – in automobile motors – by 2-4 times. At the same time, corrosion resistance of the surface of parts increases twofold, which is especially valuable for improving the life of aircraft motors. This makes it possible to also increase dynamic strength of metals under impact.

Radiation technologies with a beam of ionized radiation can hep calculate the thermodynamic load on materials and forecast the occurrence of microcraters. The treatment of materials with a strong beam of accelerated and charged particles and plasma improves their performance characteristics and creates an effect that is impossible to obtain through regular methods. Radiation technologies have a number of advantages over traditional ones: the possibility of creating high-strength materials with complex forms, reducing treatment time, and automation of the process…

— And are there already some real results?

— An example of the application of this technology is the treatment of clock parts for naval ships. In increased humidity conditions, there is danger of corrosion. The traditional galvanization method of adding an anticorrosion coating to clocks is partially ineffective; humidity, with time, penetrates the metal. We have put a copper and nickel coating on brass bodies using magnetron sputtering and radiation with a high current beam of electrons, and the result looks promising. The clock mechanisms have undergone testing for corrosion in a briny mist, and it turned out that the samples which had an electron film could serve two times longer than those treated with galvanization.

— And what possibilities have opened up for medicine and biology?

— The technology for smoothing out surface craters in metal has already been used by the Japanese for dentistry, when treating implants. The raw material is treated with a beam of electrons, and the surface comes out without even the smallest of defects. Prosthetic joints which are filed down with electron beams will also be ideally smooth. In Japan, they have also implemented the plasma filing of razors and medical needles. Such fine needles can be used for eye microsurgery, or when studying cells.

Electrophysical methods are already being mastered by manufacturers, and the range of their application is expanding.

— In atomic energy, one of the main issues is the gradual deterioration of materials…

— Plasma or electron radiation might help solve this issue. Take the protective coating of the heat-producing elements of nuclear reactors. For their steel rods with aluminum coating to last longer, in my opinion, it would be reasonable to try our technologies.

There will be big opportunities, I believe, opening up in relation to designing a source for energy of the future – thermonuclear reactors. Russian researchers have been working on this since the time of experiments under the TOKAMAK project, which was an installation for magnetic containment of plasma and creation of conditions necessary for percolation in controlled nuclear fusion. But besides “magnetic traps”, high-strength materials for reactor walls capable of containing extremely high temperatures and pressure of plasma must also be created.

Our beam method is one of the possibilities for creating such armor. We are continuing our research, and I’m sure: energy beams will still bring forth many discoveries which will change the world greatly.