Students’ Wishes Were Granted at SUSU on Tatiana Day The Tatiana Day got celebrated at South Ural State University. On January 25, in a hall in front of the university’s activity hall, took place a theatrical performance in which the university’s students and employees participated.

The event was opened by Rector of South Ural State University, Aleksandr Shestakov. “Tatiana Day is a holiday of students of South Ural State University, students of the city and our country. I wish you all to study with good and excellent grades, be healthy and exercise sports. We want our students to be successful after their graduation from the university; we want every one of them to become a high-ranked scientist, businessman, minister, governor, so that we were proud of them and they had good memories of South Ural State University.”

Then Aleksandr Leonidovich traditionally announced three wishes that he is ready to grant to students. Among students’ applications, the Rector selected the most significant ones. Thus, in the nearest future students’ campus will get new ovens, the West wing will have a leisure zone, and a copy center will be opened in the jurisprudence building. Also, SUSU Rector Aleksandr Shestakov selected the fourth wish: a Students’ Friendship Alley. “Considering the fact that thousands of international students get enrolled at SUSU, we got the idea to create a commemorative alley. But how to organize it better is for students to decide. I announce a contest on a project for SUSU Students’ Friendship Alley. The winner will be awarded, and his project will come to reality.” Another good tradition is congratulations from international students. A second-year student of the School of Electrical Engineering and Computer Science, Gabriel Lubo (Republic of the Congo) old about a present that he gave from himself. 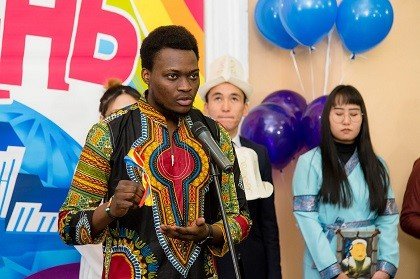 “I decided that on the Students’ Day it would be appropriate to present a key. In my country, a key symbolizes new discoveries and favors for all roads and ways of the world to be open.” Culmination of the event became a runway show of Tatianas. Female SUSU students who are studying with excellent grades demonstrated wedding dresses to the spectators.

“We practiced the runway walk many times and went for a fitting to a wedding salon. I very like the dress in which I walked today, it was very unusual to be in the role of a bride. All the show went as planned. Emotions are indescribable,” a student from the School of Electrical Engineering and Computer Science, Tatiana Serebrennikova, shared her emotions. 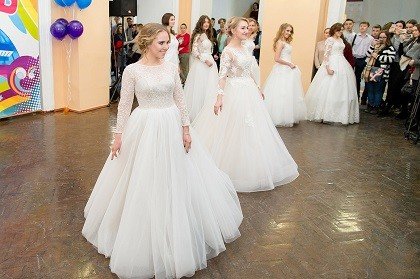 During the entire event, artistic teams of the SUSU Art Center performed for the spectators with songs, dancing and even the anthem of all students of the world – the Gaudeamus anthem in Latin language. 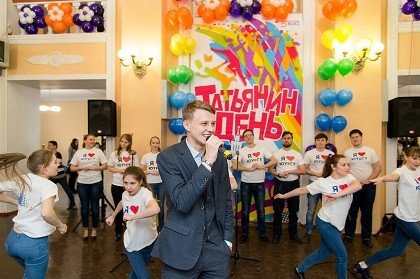 At the end of the event guests treated themselves with festive food and drinks and a photoshoot by SUSU Photo School.