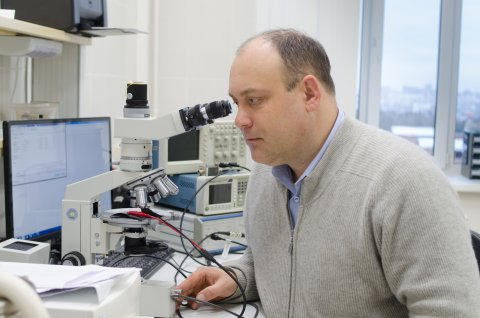 Interdisciplinary research on nanotechnology, molecular physics, optics, electronics, and biology is opening new paths for science towards solving important issues where a narrow, single-field approach cannot do that.

Researchers from South Ural State University, Dr. rer. nat. Wolfgang Haase and Dr. rer. nat. Fedor Podgornov (Laboratory of Molecular Electronics) are researching the interactions between gold nanoparticles and mesophase materials, and the possibility of applying them in electronics, biotechnologies and alternative energy. Their interaction with chiral mesophase materials were discussed in a scientific article published in one of the most prestigious journals on applied physics, Applied Physics Letters.

Prospects of Research in Pharmacology

“Chirality is one of the basic concepts of modern science. DNA molecule is a typical chiral object, or, for example, left and right hands, which cannot be superimposed with their mirror reflections by rotation or displacement,” explains Fedor Valerievich. “Chiral and achiral objects interact differently with polarized light emissions. To put it simply, this phenomenon can be explained by stating that a chiral molecule is a molecular induction coil, and an achiral molecule – a molecular wire. That is why when illuminating a chiral molecule with an electromagnetic wave, both the electrical and magnetic components of the incident illumination will contribute to its electrical polarization. This phenomenon is the basis of Circular Dichroism (CD) Spectroscopy, or the dependence of the difference of light radiation absorption from right- and left-handed circular polarizations on the wavelength. This is used in biology and pharmacology for identifying molecule chirality. This information is of critical importance for creation of new medicines and manufacture of medications where it is important to guarantee separation of right and left molecules, as they might radically differ in their physical, chemical, and biological properties. For example, cocaine with right-handed molecules is a narcotic, and with left-handed ones – a harmless substance.”

Demonstration of a chiral object

In the article published by the authors, they showed experimentally that addition of gold nanoparticles to chiral mesophase materials leads to significant changes in the spectrum of circular dichroism in optical region. In addition, the dependence of changes on the concentration of nanoparticles was shown. The results of this work can be applied in various fields of modern science. For example, they can be used for local analysis of the distribution of medications, express analysis and measurement of small concentrations of various chiral substances in medications, etc.

The future is in the molecular electronics

It is useful to note the prospects of the obtained results for molecular and bioelectronics. The properties of chiral molecules can be used to create elemental bases in molecular electronics, especially molecular inductive coils with a modulated q-factor.

“The question is how to create an induction coil on the molecular level and model its q-factor. We proved that this can be done using gold nanoparticles. Combining molecules with various characteristics, we can create electrical circuits like those of classical electronics, but on the molecular level. The advantage of this approach is that it makes it possible to work at a very low level of matter organization and create highly compact electrical circuits which can be integrated into, for example, human body.”

Diagnostics and correction of human body by using molecular and bioelectronic devices in real time is just one of the possible applications of the results the authors obtained. Constant analysis of human organs’ parameters, brain activity, and control over bodily processes on a molecular and cellular level is necessary for preventing serious diseases, improving quality of life, and increasing life expectancy. Fedor Podgornov believes that this is one of the main issues in modern science.