On the Way to Industry 4.0: Wireless Sensor with High Sensitivity Created at SUSU 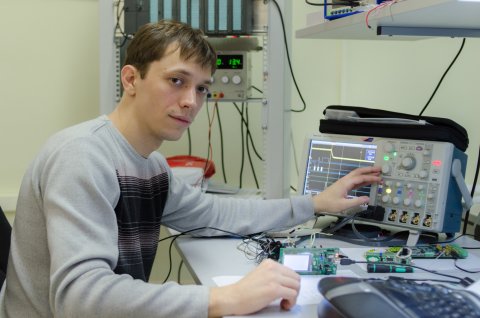 Rapid development of science and technology will lead to absolute automation of manufacture in the future. Nevertheless, any mechanism can break, and one of the main objectives of science is to be able to prevent it. The wireless sensor created by scientists of South Ural State University performs diagnostics of executive mechanisms. Data obtained from the sensor allow determining the nature of possible failure with high accuracy and timely eliminate defect.

“Creation of a wireless sensor for acceleration of rotating elements of executive mechanisms” is a winning project of the Beginning of Big Science – 2017 contest. Researchers have been working on this topic since 2013; in 2014 they received a useful model patent. About unique nature of the device and its main advantages told us the author of the project, engineer and researcher of the Department of Scientific and Innovative Affairs, Vladimir Sinitsin.

“In any system, there are both executive mechanisms and sensors. I work with executive mechanisms and their diagnostics. The main type of motion in executive mechanisms is rotation. Traditional method of obtaining information about mechanism’s condition is installing sensitive elements. Any operating mechanism creates vibrations. If we measure these vibrations and resolve the received signal into components, we can tell what is working badly: motor, running gear, etc. Sometimes there are mechanisms located in hard-to-reach places or taking part in a technology process which is difficult to stop. For example, a petroleum processing plant or metallurgy manufacture where products should be released constantly. If equipment suddenly gets out of order, it will cause big financial losses. We check individual units for determining their condition. The earlier we detect any failure the faster we can recover the technology process.”

Distinguishing feature of the invented sensor lies in the method of obtaining information about mechanism. Classic technique of obtaining data is implemented through installing a sensor on a mechanism’s body. Team of SUSU scientists proposed a new method: to install the sensitive element on the rotary shaft. Technology allowing for wireless receiving of data and wireless charging were applied in the device. As a result, a system, more sensitive to defects occurring in a mechanism, has been created. 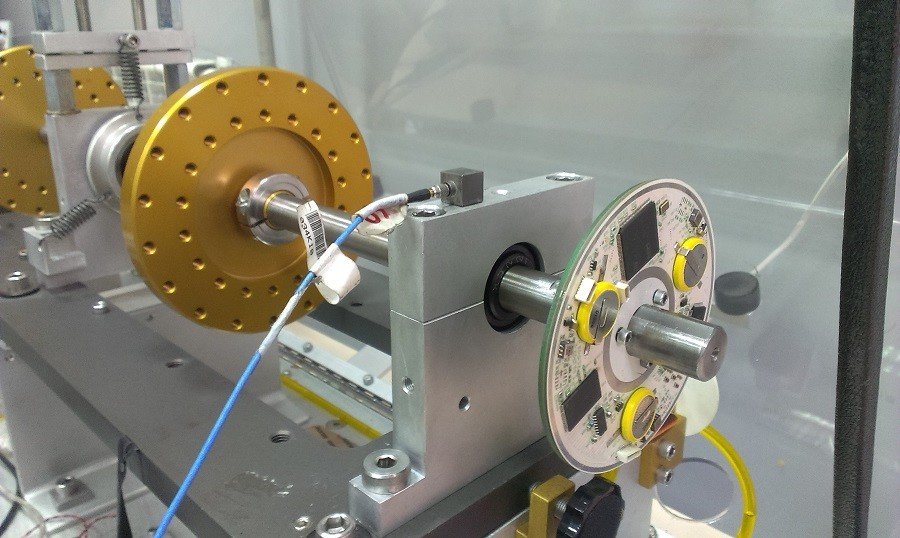 Sample of the sensor which is positioned on a shaft of laboratory stand for simulation of defects, preliminarily designed in the mechanism (Author of the photo: Vladimir Sinitsin)

“The new method allows measuring complex acceleration (linear and angular acceleration) by expanding it to different axes. This forms one more sensitive axis which carries additional information. Various defects can get revealed by a series of characteristic features, and there is always difficulty in differing one defect from another as they can have similar type of oscillations,” notes Vladimir Sinitsin. “The additional sensitive axis is one more source of information which contains data about defects and their characteristic properties. Therefore, we can determine the nature and volume of defects with a bigger validity. This is the specificity of our sensor for diagnostics of technical condition of executive mechanisms.”

At the present time, sample model of the device has been created. Experimental results proved that the sensor possesses higher sensitivity. Besides, sensitive elements are rigidly fixed in the sensor, and the sensor itself is located inside of the mechanism, which will allow decreasing the influence of human factor on fixing and orientation of the sensor. The next step is to create a sample model in its final form.

“The sensor can be used in practically any sphere where rotating mechanism is present,” emphasizes Vladimir Sinitsin. “If we are talking about mechanical engineering, it can be used for diagnostics of machine units such as ball-and-screw units, motors of machines, spindle bearings. In petroleum and gas industry, it can be used for diagnostics of driving mechanism of electric drive actuators which provide reliability ofpetroleum processing plant’s operation. The device is also applicable in atomic industry for certification of motor-driven valves.”

In the future, the project team is planning on extending the area of research and switch from separate sensors to diagnostics of the system as a whole. The wireless sensor invented by SUSU scientists is an intelligent device which performs diagnostics of executive mechanisms’ condition by their current state. Therefore, it belongs to the series of inventions which will become a part of the 4thindustrial revolution.