SUSU is Waiting for Future Specialists in Biotechnology and Psychology 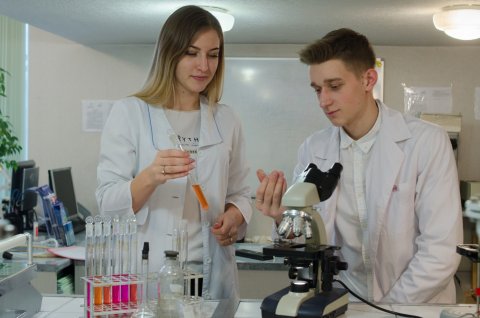 A man’s health has always considered as the biggest value in life. Technology development, discoveries in science and engineering brought the issue of preserving health to a new level; inventions of modern biotechnology get actively used in medicine. It is no surprise that biotechnology and medicine are among the most in-demand and perspective areas in education and science.

Al Jumaily Dalaf Abdulla Dalaf (student from Iraq): “I am studying to become a biotechnologist; studying at SUSU is very interesting as lecturers take their job seriously, and their high qualification makes education process very comprehendible. I have many friends here. After finishing my Master’s degree study I am planning to apply for postgraduate studies at South Ural State University.”

Liu Meibao (student from China): “My teacher from China studied here at SUSU and advised me to come to Chelyabinsk as well. I like Russian climate very much; Chelyabinsk is a very calm and comfortable city. Itis good to live and study here. I am happy to have chosen an in-demand specialty at SUSU.”

School of Medical Biology (SMB) is an innovative subdivision of South Ural State University (Chelyabinsk), whose education and research activity is targeted at solving problems in the sphere of breakthrough areas of the world level: the study of molecular mechanisms of stress and development of products for adaptive nutrition (creation of innovative food products which would improve life status of a person).

SUSU is one of the largest Russian universities. One of SUSU’s competitive advantages is its good positions in international rankings. For example, according to the Webometrics Ranking of World Universities ranking, in 2017 the university improved its positions for 213 point having made the biggest leap in such indicators as ‘openness’ and ‘excellence’. This year, SUSU for the first time got included in a world’s ranking of universities called Round University Ranking (RUR).

The SUSU School of Medical Biology performs training of specialists in well-demand professions in the spheres of medical biology and nutraceutics. The most popular training programs are Biotechnology and High-Quality Production of Functional Food Products.

“School of Medical Biology is unique precisely due to its interdisciplinary nature. Within the School it is possible to get basis education in biotechnology and medical and biological issues in the sphere of clinical psychology,” says Director of the SUSU SMB, Doctor of Biological Sciences, Professor Vadim Tseylikman.

The object of pride of School of Medical Biology is the presence of equipped research and education centers and laboratories such as: Healthy Nutrition Products and Industrial Technologies, Biomedical Technology, Molecular Genetic Studies of Health and Human Development, which allow implementing unique international research projects, targeted at solving global problems of the humanity: the study of mechanisms of stress and creation of food products for healthy nutrition.

It is possible to get higher education at the SUSU SMB on the following bachelor’s degree programs: animal-based food products, plant-based food products, commodity science; it is possible to continue education by undertaking master’s degree studies in such topical areas as biotechnology, quality control and psychology. Graduates of the SUSU SMB have a great opportunity to continue their scientific research during postgraduate studies.

Employees and students of the SMB conduct research in such in-demand area as food biotechnology, studying possibilities of the use of ultrasound for enhancing quality and nutrition value of food products.

Education is based on interdisciplinary science and education platform which provides new knowledge in the field of new medication and non-medication approaches to preventive actions and correction of problems of population’s nutrition and health. Students polish their professional skills by attending master-classes and workshops featuring experienced technologists and quality managers. Practical skills get developed while undertaking internships at food industry enterprises of the city and the region.

The system of project approach in education allows students to become highly qualified specialists by taking part in real-life projects. Venues for internships can be enterprises specializing at producing products for medical and preventive nutrition, laboratories and development agencies. Enterprises of the city of Chelyabinsk become customers of research projects and determine their commercialization.

For master’s and bachelor’s degree students, there are double-degree programs implemented in cooperation with universities of the USA, China, Bulgaria, India, Australia, France, Slovakia, etc.

High level of professional knowledge and research skills allows graduates of the School of Medical Biology successfully compete at the labor market of not only Ural region but of the whole country and even abroad.