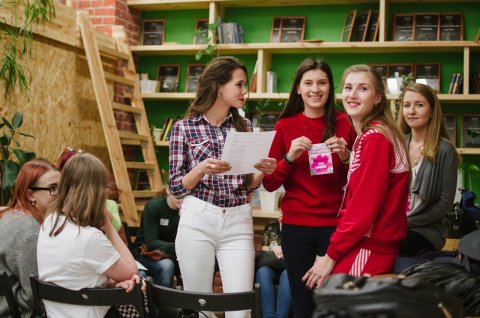 The year 2018 has been declared the year of the volunteers. A plan for promoting volunteer work has been approved. These decisions will enable the development of volunteer work and help strengthen the dialog between bodies of power and activists. This kind of dialog exists between the city’s social organizations and the SUSU student volunteers.

On December 26th at the Complex Center of Social Services, a pre-New Year’s meeting was held between students and the Day-time Vacationers Department of the Center dedicated to the Volunteer Day. At this meeting, the annual summary of volunteer work on the eve of the Year of Volunteer was drawn up.

“Father Frost will come to all Chelyabinsk children without exception,” says a third-year student of the Department of Economics and Management in the Sphere of Services, Recreation, and Tourism.

It has already become a tradition for students with the Social Work major and specialists of the Zdorovye Social and Rehabilitation Center for Children and Teens with Disabilities to invite Father Frost, Snegurochka, and other characters from well-loved tales and cartoons to visit their children. Every year the specialists of the Center and the project volunteers organize a holiday for families with social cases – they prepare a New Year concert and gifts.

On December 22nd at the Zdorovye Center, an original pre-New Year event was held in the yarnbombing style, titled “Adventures in a Knitted Boulevard”, in which SUSU students also participated. The goal of the event was achieved - to shape a tolerant attitude towards children with disabilities and create a supportive, friendly, and kind holiday atmosphere.

In addition, on December 26th, the participants remembered two important events held in April. One of them was held at the city Committee for Social Policy – the Intramural Scientific and Practical Conference dedicated to issues of rehabilitation for “special” children, and the second one, held at Chelyabinsk school No.75, was an event dedicated to the International Day of the Liberation of Prisoners from Nazi Concentration Camps.

October 9th through 20th, the third-year students organized an event for solving some social issues experienced by pensioners, as part of the International Day for the Elderly. They helped elder people clean their apartments and homes, prepare gardens for winter, congratulated them and gave them some sweet gifts.

In addition, they organized and held a Mother’s Day event at the Zdorovye Center.

Only those who are not indifferent and have great initiative are able to successfully bring socially-oriented ideas to life. Students are acutely aware of the importance of their volunteer work, so they actively participate in the preparations and execution of such events, and by doing so they gain new knowledge and skills which will come in handy once they start working.

The system for training future specialists for social work must be focused on the needs of the market. First and foremost, graduates must be able to act independently in specific situations. This thought was the keynote of the welcome speech for directors of the Complex Centers of Social Work for the Traktorzavodskiy and Tsentralniy Districts, Svetlana Ust-Kachkintseva and Natalya Machikina at the pre-New Year’s meeting.

Then, the directors of the Centers awarded guys with letters of thanks, and Rimma Lisochenko spoke on behalf of the pensioners whom the guys helped and expressed gratitude to students for their kind deeds. In response, the students said that they would continue their volunteer work in 2018.