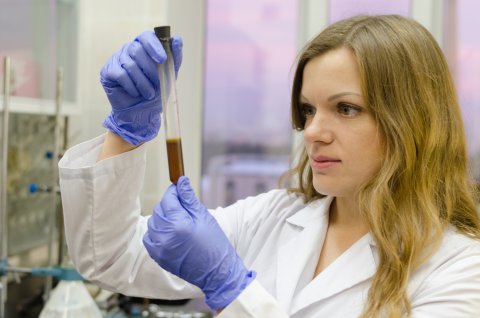 Obtaining new compounds is one of the most important fields of organic chemistry today. At present finding solutions to the problems of medicine and pharmacology is especially important. Researchers from South Ural State University are searching for compounds with potential biological activity.

The project “Synthesis and Halocylization of Alkenylene Derivatives of 2-Mercaptonicotinic Acid” won a grant at the contest “Beginning of Big Science 2017” under Project 5-100. The scientific advisor of this project is Doctor of Sciences (Chemistry), Professor Dmitriy Kim. Elena Kalita, the project author and engineer at the Department of Theoretical and Applied Chemistry of the Institute of Natural Sciences tells us about the prospects of this research and the possibilities for the application of the obtained compounds.

“We are synthesizing heterocyclic compounds. In particular, my field of research is condensed heterocyclic compounds with a nitrogen bridging atom containing a pyridine nucleus in its structure. We have the original, commercially-available compound, and through a few stages we obtain the desired product. At each stage, the obtained compounds are refined, that is, disengaged individually. The final stage is the synthesis of 2,3-dihydroazole[3,2-a]pyridine and 3,4dihydro-1H-piridine[2,1-b][1,3]thiazine systems. It is these particular derivatives of halocyclization which have potentially-high biological activity. They play an important role in the creation of biologically-active compounds and medicines. As is well known, there is a huge number of medications built upon pyridine, including, for example, vitamin PP or B3 (Niacin), which participates in many oxidation-reduction reactions and regulates metabolism of lipids and proteins; or piroxicam, which is used as an NSAID, and many more.” 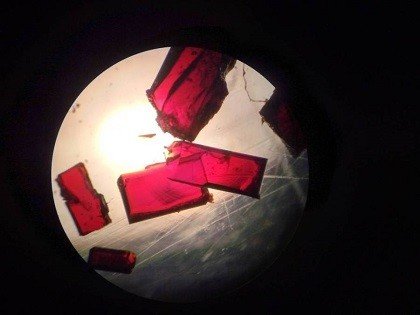 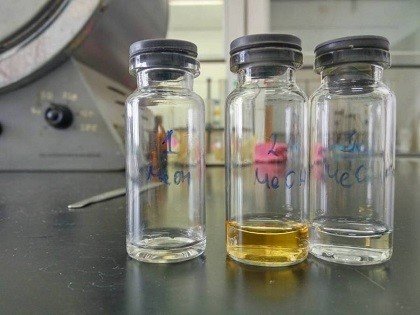 Thus, the goal of this research is to synthesize condensed, heterocyclic systems with potential biological activity. After the synthesis of new compounds it is necessary to verify their structure. This makes it possible to confirm that the reaction occurred according to the exact mechanism which was planned.

“Some of the compounds were obtained by us for the first time; others had already been synthesized,” notes Elena Kalita. “The use of a new method of synthesis made it possible to significantly increase the product yield. Product yield calculated using chemical equations is called theoretical yield. The actual yield obtained in experiments or in manufacturing is called actual yield. When the actual yield is equal to the theoretical one, we say that the reaction has a quantitative yield (100%). However, many reactions in organic synthesis do not have a quantitative yield. The process stages and occurrence of negative reactions significantly reduce the yield.”

At the current stage, the reactions of halocyclization are being carried out. It will become possible to test the compounds for biological activity when a sufficient number of derivatives has been synthesized. However, we already know that compounds based on pyridine exhibit anticarcinogenic (antitumor) and fungicidal (antifungal) activity and activity against the human immunodeficiency virus (HIV).

The next step will be researching the reactions of halocyclization derivatives with various nucleophiles. According to Elena Kalita, reaction behavior is of special interest. At persent, around 30 compounds have been created based on pyridine derivatives. Researchers plan on checking their biological activity in 2018.