Legends of the Moon Goddess: Traditions of Chinese New Year 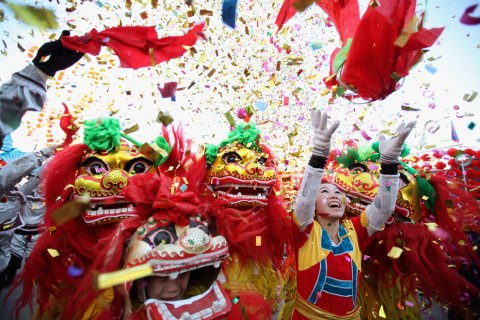 There are more than 2000 international students studying at South Ural State University. For them, celebrating New Year in Russia is a new and extraordinary experience. We asked international students to tell us how New Year is celebrated in their home countries. Student of the SUSU Institute of Linguistics and International Communication from Zhejiang Ocean University (China), Zhong Lifeng, told us about traditions and legends of Chinese New Year.

“In China we have Spring Festival which is celebrated at the end of a year in accordance with lunar calendar. That evening we organize a big festival with a lot of food and stay up all night. We cook a lot of various dishes but don’t eat them so that in the next year we have more food. Traditionally we eat chicken, pork and fish. We also have tangerines, yam pies made of sweet potato roots, and turnip pies made of chopped turnip and rice flour. That night we get together with all our family: grandparents, parents, aunts and uncles. Several days after the New Year we meet to celebrate with other relatives and friends. During the Mid-Autumn Festival which, according to lunar calendar, is celebrated in august, we worship the Moon Goddess named Chang’e. There are many legends about her. Long time ago ten suns rose in the sky together and scorched the earth. An archer named Hou Yi shot nine of the sons down the sky and as a reward he was given an elixir of immortality. He didn’t drink it right away but hid it at home as he didn’t want to be immortal without his beloved wife Chang’e. When Hou Yi was hunting, a man called Feng Meng broke into his house and tried to force Chang’e give him the elixir; but Chang’e refused to give it away and drunk it herself. Then Chang’e flew up into the sky and chose the Moon as her home. When Hou Yi discovered what had happened he got very sad and started picking fruits and cooking pies that Chang’e liked eating to give them to her as a tribute. Our New Year symbol is red paper lanterns. You should write good wishes and place them on the door. Besides, we set off fireworks and there is another story about this tradition. Once upon a time lived a monster named Nian who each year came to a village where he ate villagers, chickens and other livestock. One day, a man who was brave and smart invented firework in order to scare Nian away. The man wrapped firecrackers in red paper and set them off. The next day the villagers came back. They realized that Nian is scared of red color and loud noises. When New Year came, the villagers put on red clothes, hang red lanterns at doors and windows. Also people set off fireworks in order to scare Nian away. Ever since, Nian never came to the village,” says Zhong Lifeng.