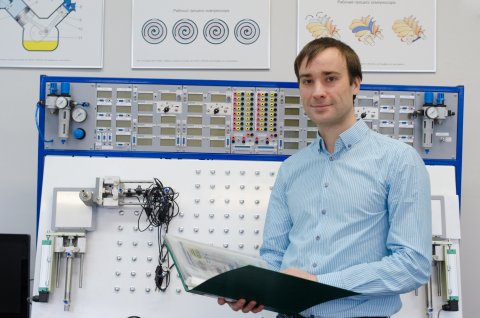 Improving technological processes is one of the topical issues of modern science. A jet blower designed by the scientists of South Ural State University may be used both as a pump and a mixing pump in aerospace, mechanical engineering, heat-and-power, construction and oil sectors of industry.

“We are studying operational process of an ejector pump with cavitational phenomena in its flow part. Operation of a jet blower is based on the phenomenon of ejection, that is, on the ability of a high velocity fluid stream to initiate movement of the surrounding medium around itself and draw this medium with it. Due to cavitational phenomena generated in the flow part of the apparatus, a more quality mixing of flows is achieved, which results in producing a high-dispersion mixture,” explains Sergey Yurievich.

The suggested method allows for continuous mixing of flows. Moreover, reliability of the apparatus is achieved due to simplicity of its design and absence of moving mechanical elements. That is why the ejector mixing pump may be widely used in various sectors of industry.

“The technological process of preparing a mixture includes several stages: preparing composition of the mixture, its production and further transportation via a pipeline. The following devices are required for this: a dispensing mechanism, a mixing unit, and a pump. However, it is possible to combine the functions of the abovementioned devices in one apparatus — a waterjet mixing pump, which is a complex machine. As a result we may be producing quality mixtures for many sectors of industry: for instance, in heat-and-power sector, for production of a diesel-oil mixture as fuel for the purpose of reducing hazardous emissions. Moreover, in mechanical engineering, alloying elements are required to be added to oil to produce quality cutting fluids; and in construction industry, paraffin pastes need to be added to concrete mixture to produce water-resistant concrete. Additional cavitational treatment of components gives a stable high-dispersion mixture.”

Initially, cavitational phenomena were considered to cause negative effects during operation of jet blowers. Within the framework of this research study cavitation is generated only in boundary jet layer and at a certain mode. This results in quality mixing.

“This device has a simple design and manufacturability, is characterized by the absence of moving mechanical parts and by high reliability, as well as by light weight and low cost. That is why this apparatus may already now be of interest to enterprises,” notes Sergey Yurievich. “For instance, an ejector pump with enhanced cavitational characteristics was engineered and designed for a mobile pump station. The work was performed by the staff of the Department of Hydraulics and Hydraulic and Pneumatic Systems under the guidance of E.K. Spiridonov. Such station was manufactured by Chelyabinsk Compressor Plant.”

At present, research on operation of the ejector mixing pump with cavitational phenomena is continuing. On the topic of this research 2 research articles indexed at Scopus Data Base (“Chemical and Petroleum Engineering” Journal, materials of the 2nd International Conference on Industrial Engineering) were published. The next stage of the project comprises studying of the effects of the jet blower operation modes on the quality of mixing. This means that the research will become interdisciplinary: its task will be studying of physical peculiarities of the process and chemical composition of the flow.