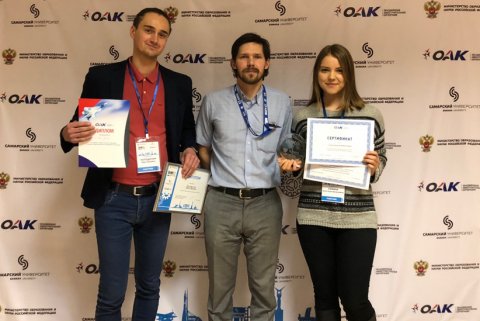 A fourth-year student Anastasia Sohina and a first-year postgraduate student Ivan Kholodilin, the representatives of the Polytechnic Institute’s Department of Electric Drive and Industrial Automation returned with a victory in the contest of engineering projects which took place on December 7-8 within the Third All-Russian Engineering Contest of Students and Postgraduates on the ground of Academician Korolev Samara National Research University. 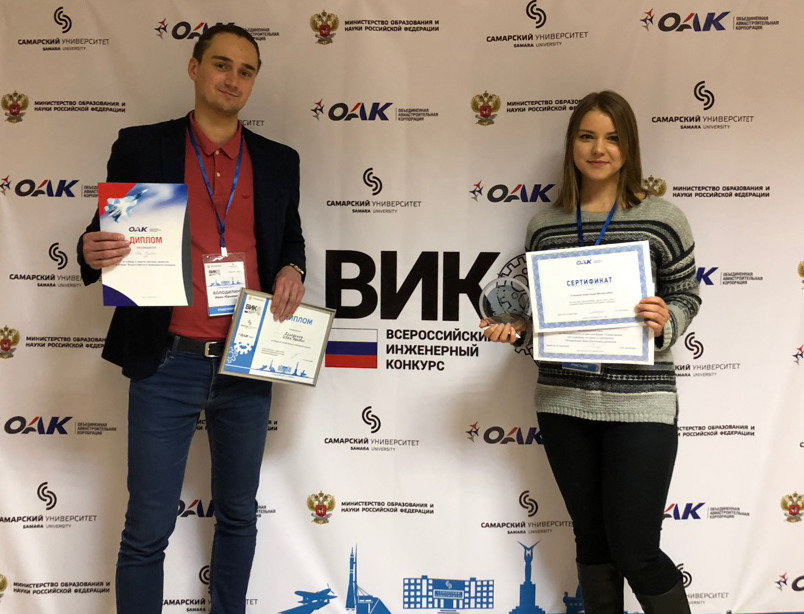 Earlier in October, our team with the project entitled “Laboratory stand with supplemented reality” became a prize-winner of the contest for IT projects called IT-PRORYV (IT-breakthrough) which was held by the Rostec State Corporation, Roselektronika Holding Company, Softline Company and the Russian Engineering Union. As winners of this contest, they made it to the final stage of the All-Russian Engineering Contest where they had to defend their project in front of expert jury, competing against 332 more projects.

According to the Contest’s rules, presentation of the project was held individually, i.e. by one member of a team. Our team’s project was presented by Ivan Kholodilin, an experienced participant and winner of various competitions.

It should be noted that the contest of engineering projects was divided into 4 sections:

Our project was submitted to Section No.2, “Automation and Monitoring Systems”.

By the results of project defenses, in tough competition with 32 more participants in the section, our team made a confident win.

The well-earned reward was given to Ivan Kholodilin on the stage of Samara University by Director of Science and Technology Department of the Ministry of Education and Science of the Russian federation, Sergey Matveev.

Ivan Kholodilin: «I took part in the project defense with a report entitled ‘Educational laboratory stand with supplemented reality’. In my section, there were 22 students from different parts of Russia. It was interesting to listen to reports of other participants, and it was really nice to get to the number of 3 prize winners of our section! By the contest’s result you understand that you are moving in the right direction! Another important motivation for me was the interest that my project excited not only among the jury but also among participants. The emotions are indescribable when during your presentation the audience puts their mobile phones aside and start listening to you attentively. Someone even came to me after my presentation saying ‘It was interesting to listen to your presentation’ or asking ‘Whom are you studying at?’ But the thing is not whom I am studying at but how I am studying. During the study we are only taught a part of what gets included in my projects, the major part of the achieved is due to self-education and sincere interest in the project. At such events, an important role plays presentation itself and the form of presenting the material which I consider and prepare very thoroughly. For example, at this contest I made a report dedicated to supplemented reality, and there was nothing better to make than demonstration.

Characteristic feature of my application is the fact that students can work with it as with a stand both at a laboratory and at home, by projecting the stand on a special target (in my case, a magazine cover). I demonstrated the option for home use to the jury by projecting iPhone’s screen on MacBook and further to the projector.

Also, I would like to thank the Head of the project, Alexander Nesterov; that was him who allowed me to diverge slightly from my major area of study to the field connected with programming, which in turn resulted in the second victory at the All-Russian Engineering Contest.

This is great that SUSU encourages and provides financing to its students, and by doing so gives us the opportunity to take part in such massive events.”

Simultaneously with the contest of engineering projects, the Rapid-Foresight strategy session of the United Aircraft Corporation, in which Anastasia Sohina participated as part of one of the teams, took place.

The session was held in three steps:

The work of the section concerned five key topics: transport, production, informational technologies, urban planning and power engineering. Winners of the session were congratulated by Director of the Personnel Training Department of the United Aircraft Corporation, Elena Mitina.

By the results of final presentations, Anastasia’s team took the 3rd place out of 16.

Anastasia Sohina: «I was honored to take part in the All-Russian Engineering Contest. Organizer of the event was the united Aircraft Corporation. Within the contest, participants were divided into several groups, each of which had its own program. I participated in a strategy session of the Rapid-Foresight OAK. The Foresight is a system of methods for expert assessment of strategic directions of social-and-economic and innovative development, and determination of technological breakthroughs which are capable to have an impact on economy and the society in a medium- and long-term perspective. Such format of work allowed me to extend my understanding of my own involvement in building the future, and helped determining possible directions for professional development. Working in a team with engineers from different Russian universities gave me the valuable opportunity to exchange experience in various spheres of science. Aside from the strategic session, leadership of the Samara University held a series of excursions targeted at learning the university’s scientific achievements and history of the city. I am very grateful to SUSU and Samara University for the valuable experience and the emotions that I got during the All-Russian Engineering Contest.”

We congratulate representatives of the Department of Electric Drive and Industrial Automation, Anastasia Sohina and Ivan Kholodilin, and the Head of the project, Candidate of Engineering Sciences, Associate Professor Alexander Nesterov on the victory and wish them further success in their educational and professional activity.