Focus on Innovations: SUSU Sums up the Results of VUZPROMEXPO 2017 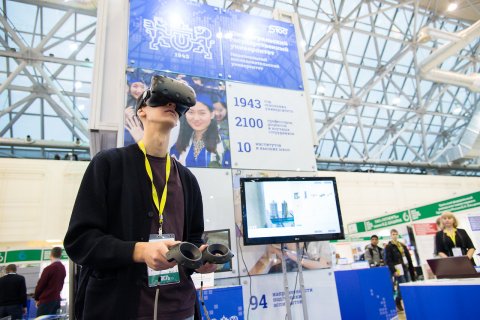 The 5th forum exhibition VUZPROMEXPO-2017 was held on December 13th-14th in Moscow. This event is the summation of partnership between the state, universities, and industry from the last year. The country’s traditional leading universities presented the results of their realization of federal programs – leading developments in the industrial, medical, and agrarian fields and more. Director of the Department of Science and Technology of the Ministry of Education and Science of the Russian Federation Sergey Matveev noted that universities need to focus their attention on two areas – their own development strategies (the government recently determined a general direction of developing science and education in Russia – universities just have to choose their niche) on the one hand, and on the other hand – forming research teams of scientists able to create a complex, in-demand product.

VUZPROMEXPO 2017 was unique in terms of its organization: separate areas were given to stands from engineering centers for universities which demonstrated their developments alongside their main exhibitions.

The forum’s business program was opened by First Deputy Minister of Education and Science of the Russian Federation, Valentina Pereverzeva. In her opening speech, the Deputy Minister shared the high indicators of partnership between the government and universities in implementing scientific developments in to manufacturing, and noted the importance of meetings at such specialized events as VUZPROMEXPO.

Discussion of questions of developing ties between university science, business, and government was held in themed sections which gathered a large number of participants every day. In “University 3.0” Section, participants discussed the organizational mechanisms of realizing large scientific and innovative projects, questions of planning and resource provision, questions of technology transfer and supporting the diversification of the military industrial complex, and criteria for evaluating universities’ innovative activities.

In Section “Science and Government”, participants discussed scientific and technological priorities of the partnership between the Ministry of Education and Science of Russia, the Ministry of Defense of Russia, and organizations of the military-industrial complex. Sergey Vaulin, Director of the SUSU Polytechnic Institute, took part in this discussion.

One of the elements of the business program was the contest MediaResonance, organized by the journal “Accreditation and Education”. South Ural State University was awarded a first-place diploma in the “Backstage” category for presenting academic services using modern and non-standard approaches for promotion. 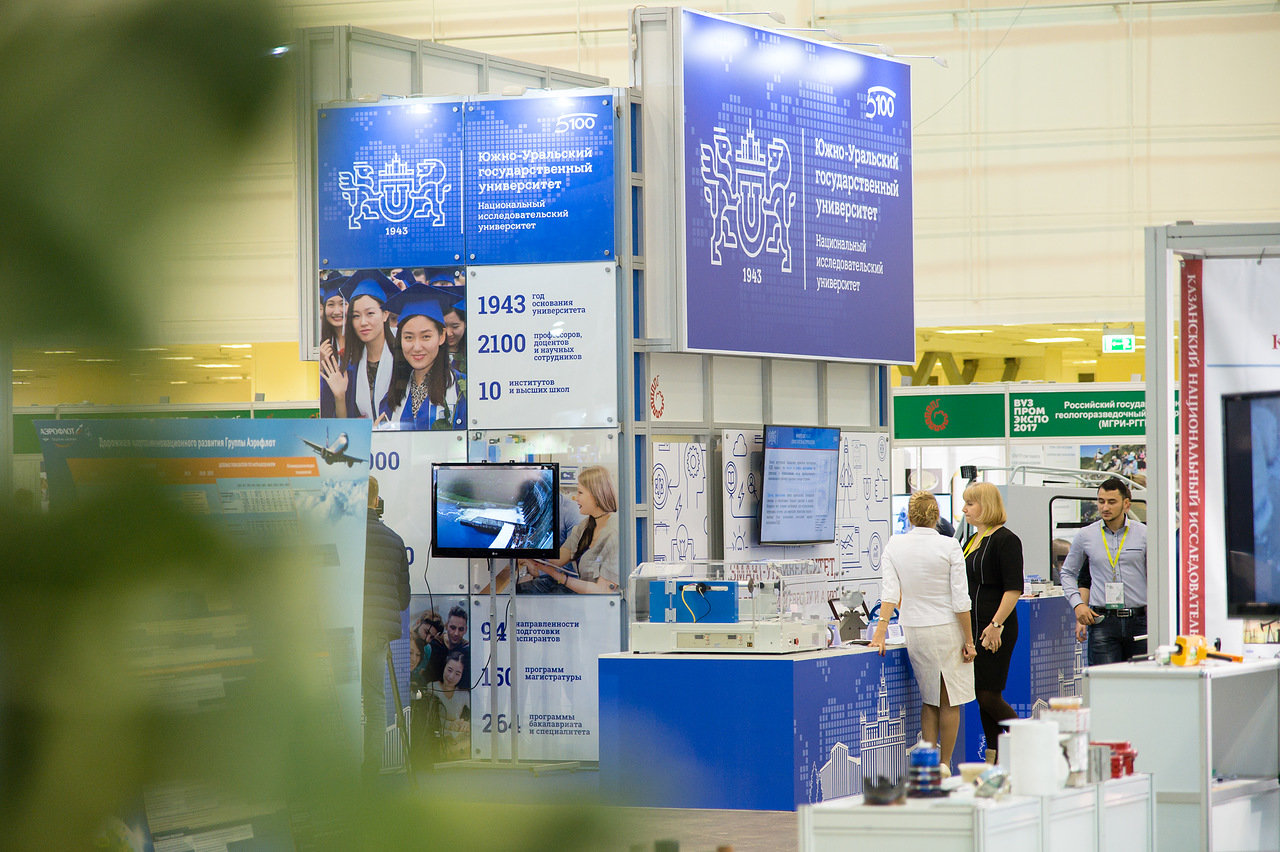 A youth program was held during the two days of the exhibition’s business program. The base of this was a contest for student projects VUZPROMFEST, in which young researchers demonstrated their developments, and a number of strategic sessions organized by the Association of Accelerators and the Neuronet Industry Union, aimed at stimulating the business initiatives of young people and helping form contacts between young people and potential project investors.

South Ural State University’s stand, executed with a new, unique style, was of great interest to participants and exhibition guests. The exhibit was based on the results of realizing a number of federal programs and other breakthrough developments – instruments and equipment for the oil and gas sector, modern alloys and composite materials, and manufactured goods for mechanical engineering and machine tool technology.

“We presented three main projects and, like always, they are closely tied to industry and programs of import substitution,” noted Vice Rector for Scientific Affairs Alexander Dyakonov. “This includes the Coriolis flowmeter – a piece of equipment for measuring the mass flow rate of petroleum products (made in cooperation with an industrial partner – the company ElMetro Group LLC). The exhibition model makes it possible to measure mass flow in a two-phase fluid stream. The second project is developing parts from metal concrete with the Kolomensk Machine-Tool Building Plant (a true innovation – the material is designed to totally replace cast iron), and the third product is the development of new materials for shut-off valves in oil and gas complexes (work is being done by a research team from the SUSU Zlatoust Branch).”

The Research and Education Center Aerospace Technologies presented new technologies and samples of modern composite materials – a cold plasma generator (the use of plasma in processing various surfaces significantly improves their adhesion), samples of feedstock and liquid compounder for manufacturing composites, a sample of a new type of insulation material, and machine for the creation of ultra-thin nanofibers, which are widely used in both civil and military applications.

The Laboratory of Energy Efficient Technologies in Collective Use presented an innovative system for outdoor lighting which works in the majority of cities in the Chelyabinsk Region in an automatic mode.

Of special interest to guests of the stand were the interactive complexes from the small innovative business Uchtech-Profi – the training stand Pilot Ultra Light (an aviation simulator for training civil pilots) and the multi-functional interactive 3D informational complex Trainers and Emulators for Industry. 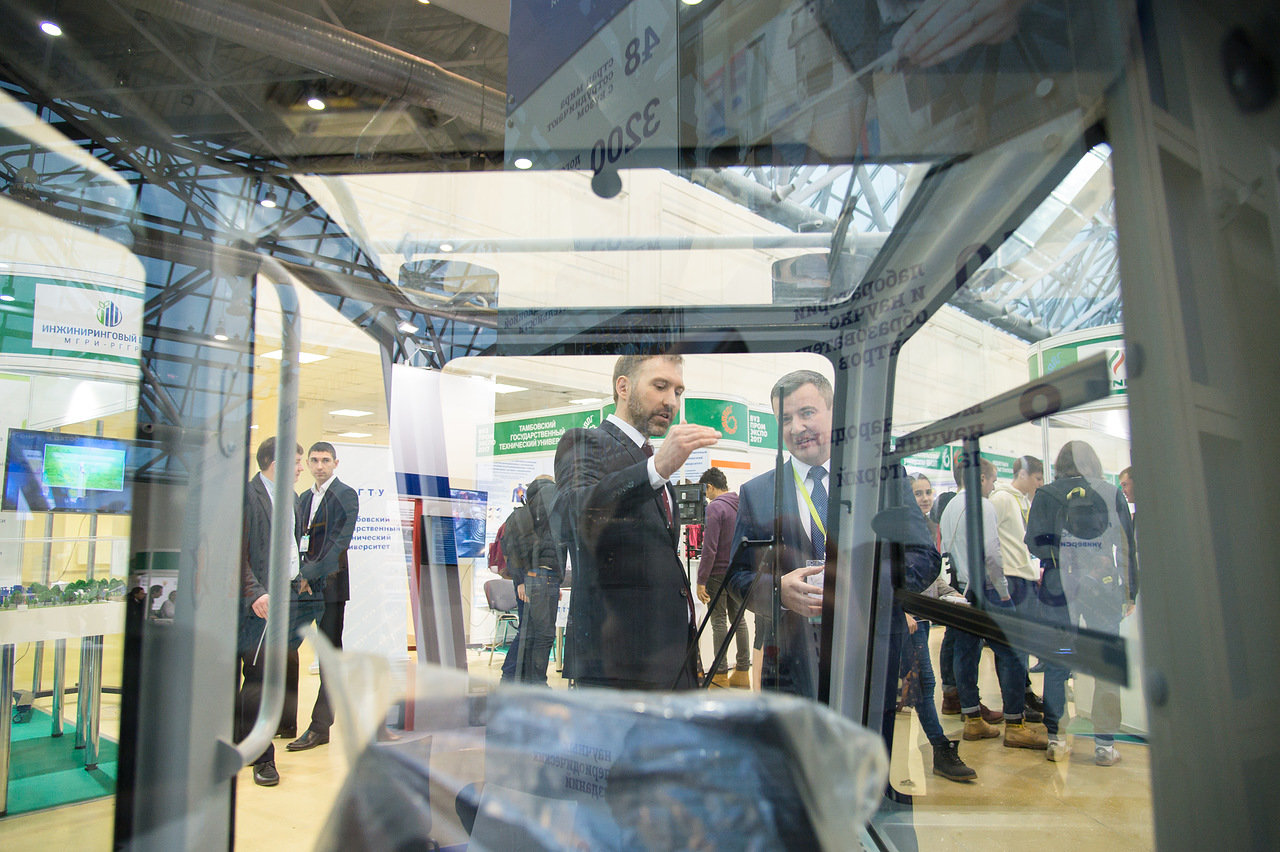 One more important goal that the university has set for itself is making new contacts with potential partners and exchanging experiences with other universities. In particular, developments by SUSU researchers interested partners from Ufa State Aviation Technological University, Kazan National Research Technological University, and the Almetyevsk State Oil Institute. Throughout the exhibition, several important negotiations were held with representatives of the industrial sector (groups from the companies Tsentr, Alkor, and a few others), which will lead to new projects with these businesses in the near future.