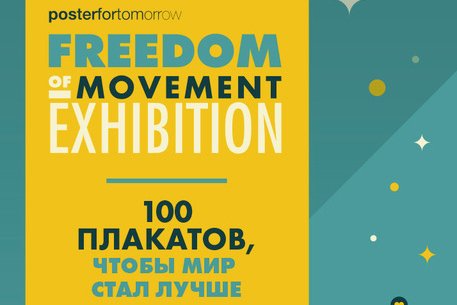 The “Freedom of Movement” contest is a ninth contest under an independent non-commercial international project “Poster for Tomorrow”, which every year prompts designers from all over the world to create social posters drawing attention to the human rights issues. This year’s theme is the right for the freedom of movement — the freedom to move to a different country in search of a safe place for living.

“People of various nationalities bring with them different colours, diversity and life to the world. If we are closing our borders and building walls to keep them out, we will be plunging into darkness” — that was the main idea of the brief on which designers from all over the world based their works. The number of this year’s creations amounted to 6,993. A 100-member online jury selected a short-list of 300 best works among those posters, and then the main jury which convened in Paris selected 100 posters, to be presented at the exhibition later.

On December 8th, right before the International Human Rights Day, this exhibition will open in different cities around the world — Russian exhibit will premiere at Biblio-Globus bookshop in Chelyabinsk.

Among the members of the contest online jury this year were two citizens of Russia, one of whom was Pavel Pisklakov, member of the International Association of Graphic Designers (ATypI) and of AIGA (the Professional Association for Design, USA), Senior Professor at the SUSU Department of Service and Technology of Material Artistic Processing.

“We exhibited the works under the “Poster for Tomorrow” contest for the first time in Chelyabinsk five years ago,” says the Professor. “And the contest has been expanding over these years. Every year there is a new theme, and every year we see new 100 posters: strong, sometimes provocative, but always making you stop, take a look around and think about the problems existing in the world today.”

“Poster for Tomorrow” is an independent non-commercial international project aiming at prompting people (both from the designers’ community, and beyond it) to create posters stimulating discussions of the problems related to every one of us. Posters by the Chelyabinsk designers twice were among the Top-100: in 2015 (poster by Sergey Dunaev) and in 2013 (poster by Vitaliy Kontuganov) — both times those were the only posters representing Russia in the Top-100. These designers created their posters while studying under “Technology of Material Artistic Processing” program at the SUSU Department of Service and Technology of Material Artistic Processing.

Information on the exhibition and other events may be found on the following social networks: