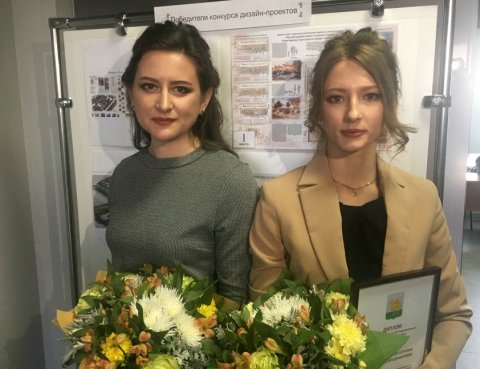 Students of the SUSU Institute of Architecture and Construction took 1st place for their participation in the open contest titled “Best Design Project on Reconstructing Public Spaces in Chelyabinsk.”

The idea for this contest was put forth by the United Russia faction in the city Duma. The contest lasted for more than three months, and any resident of Chelyabinsk was eligible to participate in it.

“We held public meetings, and residents noted 5 places that they would like to change. We listened to their ideas, and I think this is very important, because there must be some feedback. It was important for us that residents shared their opinions and, of course, we will continue this contest. Now we are looking forward to a public meeting where we will decide when the winning projects will be realized,” shares Stanislav Mosharov, representative of the Chelyabinsk city Duma.

The students of the 5th year of study of the IAC Faculty of Architecture, Polina Gavrilova and Yana Zhirnova, are the winners of this city-wide contest. The winners talk about how they were able to win in such a big-scale contest.

“We developed our project over the course of a month after having received the technical assignments. The project includes groundwork for the beautification of the park area in the Kalininskiy District and the pedestrian areas along Universitetskaya Naberezhnaya Street. We would not change the landscape completely. We simply took our ideas for it and worked around the existing site. For example, in the Kalininskiy District park, we had to create a building and entrance area, which was mostly Yana’s work. Around Universitetskaya Naberezhnaya Street we had to create a recreational area and an area for walking dogs, and this location is what I was working on. The pet areas were placed at the former location of sports areas which had lost their importance due to their proximity to the main road.”

“In terms of the technical assignments, we met all of the requirements,” Polina Gavrilova, student of the SUSU Institute of Architecture and Construction, says with confidence.

Since the contest was held in autumn, the style of the projects had to display the colors of autumn, and this task the students managed to fulfill.

“When we were creating the project, we tried to be as realistic as possible. When we looked at the plot of land, we immediately determined what it was missing. That’s how certain additional elements appeared: a building at the location of a former fountain; an entrance area and recreation area – which they didn’t have. We tried to zone the territory so that the local residents could be surrounded by nature, walk their pets, and be a part of the life that exists in the district,” says Yana Zhirnova, student of the SUSU Institute of Architecture and Construction.