SUSU Students About Their Living and Studying in Russia 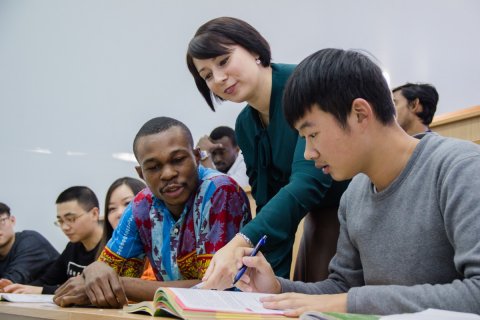 Nowadays there are many international students. For example, more than 2 thousand students from abroad are studying at SUSU. Students come not only from the CIS countries, but also from Iraq, China, America, Syria, Sri Lanka, Venezuela, Morocco, etc.

In order to help international students, the Center for Sociocultural Adaptation was established at the university. Volunteers of the Center always provide various types of assistance: starting with buying a SIM card and up to applying for the Shooting Club. Along the way, they make amazing discoveries and learn cultural

The first problem of newcomers is the language. Strange as it may seem, many young people come studying here with practically no knowledge of Russian language. Therefore they study at the Language Center not less than a year. Volunteers from Russian students help foreigners to master communicative skills by organizing joint trips to movie theatres and bowling, or just gathering at someone’s home. Once a week, the Speaking Club organizes meetings where Russian becomes the common language.

“Americans start speaking Russian sooner and easier than others,” says Supervisor of the Center, Dina Valeeva. “Arab students are very hard-working, and our sounds are similar with theirs, so they also start speaking quite soon. Meanwhile representatives of Latin American countries have more difficulties, though they predispose by their communicability. In contrast to them, Chinese students often communicate within their own groups of people – they even try not to walk around alone.”

For Vigeveera Uvindu, a student from Sri Lanka, the most difficult was getting used to the fact that few representatives of official bodies can speak English.

“Specialists who issue visa and registration can’t speak English,” says the student. “It was also a while till I got used to the food – it’s not at all spicy and lacks of salt. I noticed that prices for Russian food are quite low, but fruits that we got used to eating are expensive. I liked the locals – they are very kind. Young people are very communicative, but older people are more closed. By the way, I started living in a dormitory with Russian students right away, and they helped me a lot – with my homework, for example, or by inviting me for borsch. In exchange, I cooked our national food.”

Sometimes, different cultural mentality causes awkward situations. For example, Chinese students love their national spices so much, that sometimes their smell follows students from the Celestial Empire even in classrooms. And Arab students love scented gels and perfume.

Russian people also have to comply with the norms of communication which are standard for the Near East countries: for example, for Arab people, raising one’s voice  practically always means aggression.

The Ural weather is the subject of complaints of almost all foreigners, but students from Africa are especially sensitive about it.

“The following situation can occur frequently: it started raining, and a student from Kongo is texting the teacher: ‘I’m not coming to the exam, it’s pouring outside and I don’t have an umbrella, I’m afraid to catch cold!’” laughs Dina Valeeva. “The majority of international students is guys – perhaps, girls’ parents are afraid of sending them somewhere far away. Although this year we even have two female students from Morocco: one of them is from a more conservative family so she walks wearing a headscarf, but the other one is hard to differ from Russian students. Female students from Iraq are all wearing headscarves, whereas Syrian female students are quite mundane. There are also many Chinese girls. Here I should explain that only the best ones come to study in Chelyabinsk – to them, this is a privilege as applicants need to get selected by a competition.”

Our students happen to help international students not only with the language, although the “great and mighty” is a serious challenge even for those who has been studying in Russia for more than a year – many teachers write on the blackboard too fast and sometimes indistinctive, or love various abbreviations. Volunteers help dealing with the language, and also with buying a SIM card, processing documents, and one of Chinese students asked to help him join the Shooting Club.

“For me and my friend, the first challenge was the cold,” recalls Vijan, a student from Iraq. “My friend got so frustrated that he even intended to leave Russia right away. We also had problems with the food – our religion prohibits eating pork and other non-halal food. So we didn’t even go to the canteen – we only cooked at home. Now I can eat anything, except for the pork, of course. Russian language became a real challenge as well – especially the ‘Yi’ sound and the cases. First we were scared to walk far from the usual route, and walked down to see the Revolution Square only two months after arrival.”

Love affairs as well happen between foreigners and the locals, but what is distinctive, even if it comes to a marriage, the new couple stays living in Russia.