SUSU Scientists are Competing with Nature 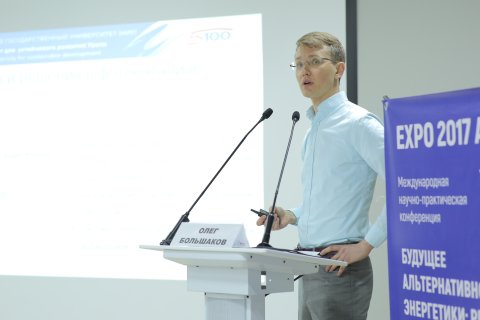 Among the most prospective areas of applied and fundamental sciences, which are in the focus of not only South Ural State University’s researchers but the entire world, is creation of new inorganic materials. Research fellow of the SUSU Department of Science and Innovation Oleg Igorevich Bolshakov told us about this activity. 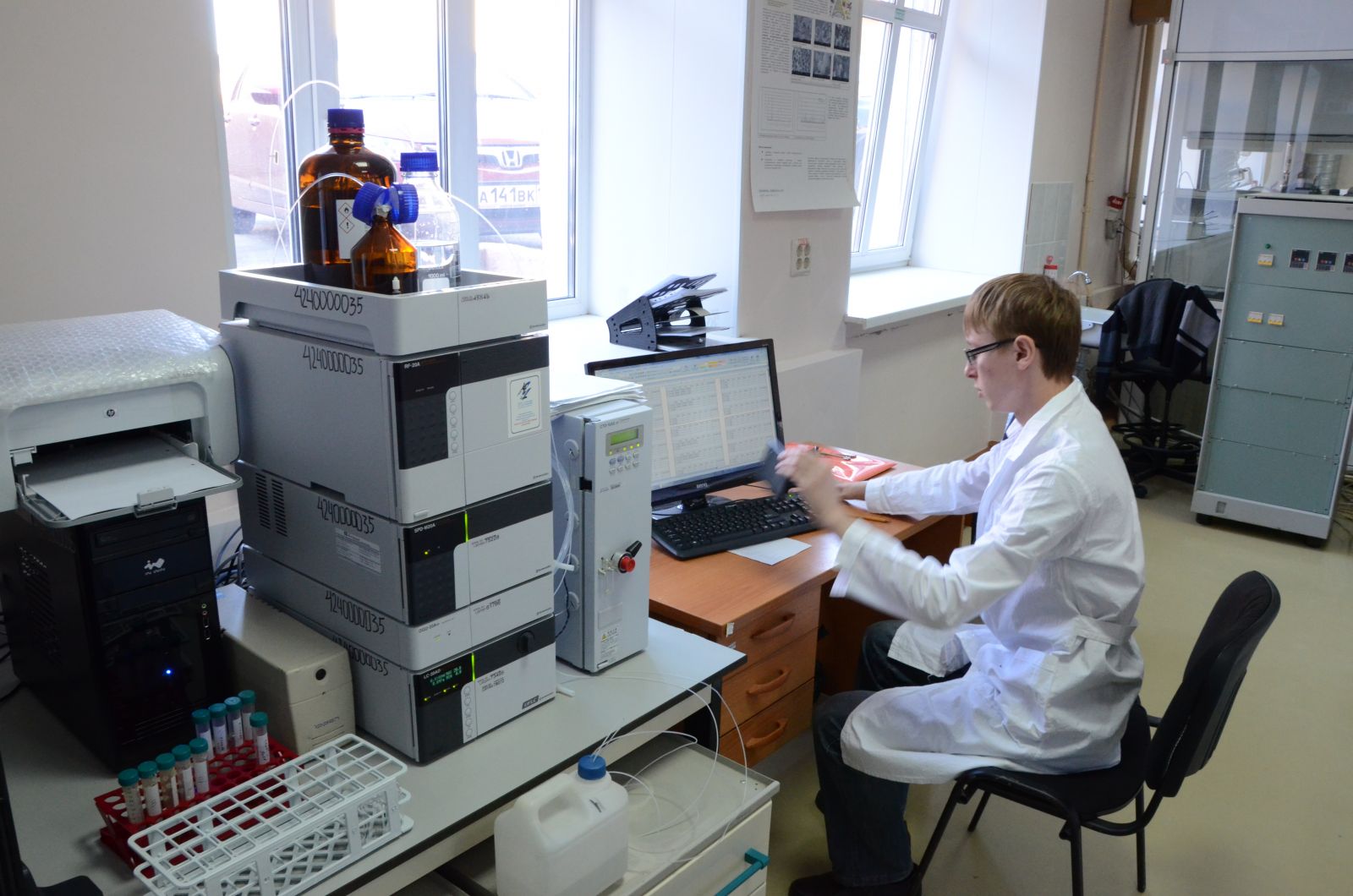 Minerals from a test-tube

Topic of the project that we are working on is connected with forming industrially important inorganic materials in mild, biocompatible conditions. We are trying to reduplicate processes of growth of a living organism’s inorganic parts – bones, teeth, conches. What substances form them from the position of an inorganic chemist? It is calcium phosphate for vertebrates and calcium carbonate for unicellular and mollusks. It is calcium carbonate precisely that composes chalk bottom deposits which were formed in ancient times out of shells of primitive organisms – the well-known chalk which is used in industry.

How are inorganic parts of a living creature formed? It was only thirty years ago that scientists neared to answering this question, when they learned to extract proteins from mollusks and unicellular. It turned out that skeletal tissue, which composes mollusks’ shells, actively evolves protein silaffin which is capable of forming calcium carbonate out of ocean-water-dissolved salts and tissue fluid: the ions, having merged in the necessary proportion, form a substance which can be compared to inorganic material by its hardness. By its strength characteristics, it beats any material on the basis of calcium carbonate, obtained in a laboratory. The same situation is with calcium phosphate which forms all bones and teeth of higher (vertebrate) animals.

The secret lies in the fact that simply obtaining the mineral is not enough – it is necessary that the mineral consists of crystals of specific sizes, arranged in a certain pattern, according to hierarchy. It is for a reason that there is an entire discipline of Obtaining Hierarchically Organized Materials existing in Chemistry of Materials. It is precisely hierarchical organization at the sub-micro level that not only gives a substance the necessary strength characteristics, but also provides the possibility to obtain catalytic, sorption and photocatalytic materials on its basis. This simply happens due to the fact that the present in organism biomineralizing proteins are capable of forming crystallites – tiny crystals of microscopic size.

By the way, bone tissue by its essence is a large accumulation of such tiny crystals packed in a special way that provides bones with elasticity, strength and absence of fragility. It is interesting that the calcium phosphate, which composes bones of humans and animals, by its properties beats the one obtained in laboratory.

The main goal which is set by researchers is to reduplicate the processes, which take place in a living organism, in a test-tube, and obtain inorganic substances composed of specifically packed micro-crystals, so that afterwards create on their basis materials which would possess high strength or other functional characteristics.

Why do we need this?

“Originally, we had a goal to form a catalytic material which could be used in chemical industry, says the scientist. It is known that all materials for solar batteries as well as catalysts used for production of chemical raw material or plastics are formed on the basis of inorganic substances with exact structure organized at the sub-micro level. One thing is obtaining a beautiful smooth crystal which we can see, for example, in cases of geological museums; and another thing is controlling the growth of a crystal with face in a size of several nanometers. This is exactly what the SUSU Research and Education Center of Nanotechnologies and nanotechnology in the whole world are doing. In nature, these crystals are formed by routine method, without the use of toxic reagents, complicated equipment, in biocompatible conditions of a living organism. And researchers are trying to produce the same crystals using large and massive experimental facilities in laboratories. Having obtained a few hundreds of milligrams of the substance that organism easily produces in mere days, scientists are boasting with their success to the entire world. Controlling sub-micro properties of inorganic compounds is a nontrivial task; if chemists can complete this task, they will receive the instrument for producing and controlling vitally important and industrially significant materials – including catalytic materials.”

Where can we use it?

Nanocrystallic inorganic materials is the basis of semiconductor industry. All semiconductors which people nowadays are trying to obtain and control and which are used in resistors and thyristors, all materials for solar batteries, catalytic materials for basic organic synthesis - styrene, propane, propene, all plastics, the entire petrochemical industry, i.e. the cutting edge chemistry – are the catalysis on inorganic materials organized by a specific order. Learning how to control their properties at the sub-micro level is the main goal of nanotechnology.

At the previous stage of nanotechnology’s development, methods of the last and the one before the last centuries were used: people tried to control sub-micro parameters of materials by macro-methods – by changing temperature, pressure, and velocity of mixing and adding reagents. Figuratively speaking, this can be compared to eating noodles with an excavator bucket instead of using a fork. Groups of scientists who manage to do this are well-known in the whole world, results of their research are published in high-ranked scientific journals, their work is an art. At the same time, proteins in living organisms easily control the same parameters with the use of other proteins, the substances which present in an organism in plenty, and which perform corresponding functions.

What SUSU scientists do is forming such exact analog of natural substance which would be capable of controlling sub-micro properties of organic material in the same way this happens in nature.

“Proteins responsible for forming micro-crystals are composed of many thousands of atoms of carbon, nitrogen, hydrogen, continues Oleg Igorevich. In order to simplify the task of analysis, scientists started breaking proteins to pieces with the use of ferment trypsin – analogous processes take place inside the stomach when organism digests, for example, meat. During the research, scientists discovered that only several parts of a protein are responsible for forming inorganic crystals, therefore, there is no need to synthesize the whole large molecule – this can be managed with a short chain which should be used for controlling required properties of the target inorganic substance. After having obtained such short chains, they were placed in solutions of animals’ tissue fluid. As it turned out, these fragments were enough, because precisely these fragments cause formation of inorganic substances. At a closer consideration it turned out that these fragments contain a lot of basic amino acids such as lysine, arginine and histidine.”

Science is following in tracks of nature

“Our goal is to reduplicate what nature does, following the assumption that the target synthetic fragment, obtained in a laboratory, must contain more abovementioned basic amino acids, rather than the one obtained from living organisms, explains the researcher. The first assumption is followed by the second one: in a solution, this molecule possesses positive charge not less than three. The third assumption is that the substance possesses sorbing properties towards the forming phase. It means that if calcium phosphate is forming, the substance which precipitates it can be very well sorbed on it. These three assumptions, based on the knowledge about similar natural fragments, are resulted in a hypothesis about the desired synthetic fragment which we want to synthesize based on the hypothesis.”

How is it done?

As Oleg Igorevich explained, 60 years ago scientists have already mastered and automated the so-called solid-phase peptide synthesis. This process is used for obtaining biologically active substances, including medications. It is known that all basic components of the living are fats, carbons and proteins; the latest, in turn, consist of twenty amino acids. Chemists learned automatically and manually compose various combinations out of these twenty amino acids; and the number of these combinations amounts to trillions. But SUSU researchers draw upon the abovementioned three assumptions which significantly narrow the range of peptides which can be obtained out of twenty amino acids.

The scientists accumulated a large amount of material which allows using statistical (quantum-chemical) methods for forming models of substances’ properties. It is possible to predict using just the structure of a substance whether it will be, for example, a protagonist and will block some ferment, or whether it will be poisonous for some bacteria. Having studied a massive amount of data it is possible to trace regularities which bring knowledge. This is a classic inductive approach.

“Now we are forming knowledge about sorbtion of amino acids and components containing amino acids, says O.I. Bolshakov. On the basis of this knowledge we can make assumptions about properties of longer compounds. It is unnecessary to synthesize a long chemical chain; it is enough to possess knowledge about sorbtion of small fragments – and then you can propose a hypothesis that a longer chain, containing the same fragment of amino acids, will possess the similar properties.”

The group of Oleg Igorevich Bolshakov is working on forming a model of sorbtion of substances containing amino acids, on the basis of titanium oxide – the industrially important substance. As it is known, titanium oxide is used for creating catalysts. Director of the Research and Education Center of Nanotechnologies, Viacheslav Viktorovich Avdin, is working on this topic. Titanium oxide is also used as a basis of catalysts in solar power engineering. Controlling its properties with the use of molecules containing amino acids is a topical issue for the science of materials. The group of O.I. Bolshakov includes an engineer of the Department of Ecology and Chemical Technology, Sergey Vladimirovich Merzlov, a student of the Faculty of Chemistry, Artem Schelokov, and a master’s degree student, Roman Morozov. The topic was proposed by Oleg Igorevich – he has been working with peptides for five years already. The group is assisted by specialists in the sphere of titanium oxide, Viacheslav Viktorovich Avdin and Igor Vladimirovich Krivtsov. Oleg Igorevich Bolshakov obtained grant of the Russian Foundation for Basic Research which greatly boosted the research.

Nowadays, the scientists are at the initial stage of the research. Of course, there is an active cooperation with Russian and foreign colleagues, including the N.F. Gamaleya Scientific Research Institute of Epidemiology and Microbiology, RAMS and the Bulgarian Academy of Sciences, on the issues of synthesis and character of peptides. The final goal of the research is creation of new materials which can be used in medicine (for example, in recovery of bone tissues), or chemistry.