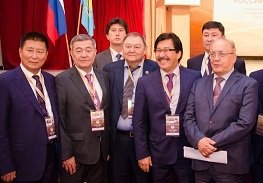 On November 8, more than 300 representatives of Russian and Kazakhstan universities gathered in one of the largest Eurasian universities – South Ural State University; the main topic of the Forum was discussing educational initiatives and signing agreements on collaboration.

As participants noted, the Forum allowed not only exchanging opinions but also determine vectors of collaborative development.

“The Forum can be rightfully considered the beginning of a long-term international cooperation. Education has no boundaries, therefore we would like to develop joint programs with Russian universities,” noted Rector of the Taraz State Pedagogical Institute Dariya Kozhamzharova.

Program of the Forum was divided into two massive blocks. Three sessions were held during the morning part of the program. One of the sessions was dedicated to education as the key factor for enhancing competitiveness of human capital. The second – to development of innovative activity of contemporary universities. At the third session, Rectors discussed strategic partnership of Russian and Kazakhstan universities. The President of the Russian Union of Rectors, Rector of the Lomonosov Moscow State University Victor Sadovnichy and the Chairman of the Council of Rectors of Universities of the Republic of Kazakhstan Erlan Sydykov opened the meeting.

In turn, Victor Sadovnichy in his speech not only congratulated everyone on the beginning of the Forum, but also emphasized that issues which bring together Russian and Kazakhstan universities will be discussed at the event. Besides, the MSU Rector noted that the two states managed to preserve language, cultural and scientific solidarity.

Also, the Head of the Russian Union of Rectors announced publication of a new ranking of the world’s universities which specialists from the MSU worked on. According to Victor Antonovich, work over the research has already been completed. 500 foreign higher education institutions and 50 Russian universities will be presented in the ranking. The MSU Rector noted that criteria for composing the ranking differed from the criteria used in the world rankings.

“We were assessing universities based on their contribution to development of the society and their influence on it, and not only on the number of research papers publications or scientists’ quotation,” said Sadovnichy. “It is interesting that some universities’ opinions have changed, for example, the opinions of Japanese or Iranian universities.” During the work of the second session, Rector of SUSU Alexander Shestakov presented a report in which he tols about scientific potential and innovative developments of the university. According to the Head of one of the largest Russian universities, nowadays the university is working on development of the most important projects which are in-demand in the sphere of economy, including the development of equipment for power saving which provides economizing up to 40%.

Also, Rector of SUSU talked about the work for creating power-saving technology for the MMK, about robotic engineering and development of additive technologies. According to Shestakov, the Center for Supercomputer Modeling helps the university to develop new technologies. The Center is highly estimated not only in Russia but also abroad, from where the university receives orders for performing research projects.

“We are proud with the vote of confidence given to SUSU when choosing the future venue for holding the Forum. Our university was chosen for a reason, as there are 3400 students from Kazakhstan studying at the university; 15 professors and associate professors from the neighboring Republic are delivering lectures; 45 young scientists from Kazakhstan are conducting their scientific research. I am sure that the Forum will allow not only establishing new contacts between the two countries’ universities, but also help showing the international community the possibilities of our university,” noted the SUSU Rector Alexander Shestakov.

The second part of the Forum was held in the form of plenary session in which participated the two countries’ Ministers of education and science, the Plenipotentiary Representative of the Russian President in the Ural Federal District, and the Governor of the Chelyabinsk region. On behalf of the President of the Russian Federation Vladimir Putin, his Plenipotentiary Representative in the Ural federal District Igor Kholmanskikh welcomed participants of the Forum.

“Our nations have been historically connected by close friendly, cultural and economic connections. Extending of collaboration of Russia and Kazakhstan in the sphere of education and science is of primary importance. Kazakhstan is the key partner of Russian universities. I am sure that today’s event will favor for the further strengthening of connections, to making constructive decisions for efficient collaboration in educational and scientific environment,” cited Igor Kholmanskikh the words of the Russian President.

The Governor of the Chelyabinsk region Boris Dubrovskiy in his speech also stressed the necessity to extend collaboration between the countries and boundary regions.

“There are ‘horizontal’ connections established between universities of the Chelyabinsk region and Republic of Kazakhstan. In this area, the activity of SUSU, within which walls we are today, is of a special importance. We and our Kazakhstan colleagues have mainly similar conditions in economy, in the sphere of science and culture, and in healthcare. Our educational programs are in-demand on both sides of the border. At that, we clearly understand the importance of mutual complementary competencies in science and education sphere, and we aspire to constant exchange of experience and educational technologies,” said Boris Dubrovskiy; he also mentioned that there are three thousand students from Kazakhstant who are currently studying at the Chelyabinsk region’s universities.

He encouraged participants of the Forum conduct joint scientific research within the interuniversity cooperation.

The Minister of Education and Science of the Russian Federation Olga Vasilyeva in her report paid special attention to the main topic of the Forum – the development of human capital. She emphasized that the main role in formation of human capital plays higher education, and noted that it should comply with the modern requirements. 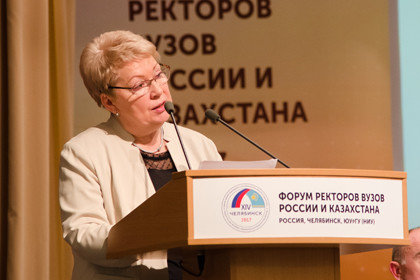 “Significance of such meetings is very high; the scale of our Forum, the fact that leaders of more than 100 universities took part in it signifies the high level of interest to developing an international dialogue and searching for new forms of cooperation. Let me once again remind you that human capital is, first of all, the totality of knowledge, skills and abilities used for satisfying multiple necessities of a man and society in general. At that, the core of human capital was, is, and will always be a well-educated person who is creative, initiative, and possessing high-level professionalism,” addressed the participants Olga Vasilyeva.

The President of the Russian Union of Rectors, Rector of the Lomonosov Moscow State University Victor Sadovnichy, while drawing conclusions of the Forum, noted that a huge cooperation background has been accumulated between Russian and Kazakhstan universities during many years of collaboration. He directed attention of the event participants to the necessity to maintain the quality of high education quality characteristic for Russian universities, especially in the sphere of natural, scientific and engineering disciplines.

“We can master the Western educational model and practice at any time, but we must preserve fundamental nature of our education, this precisely is our competitive advantage,” noted Victor Sadovnichy.

By the results of the Forum of Russian and Kazakhstan Rectors, a joint resolution on cooperation in the sphere of science and education, students’ training and education, joint utilization of laboratories and technical equipment of universities, and implementation of joint projects was accepted. 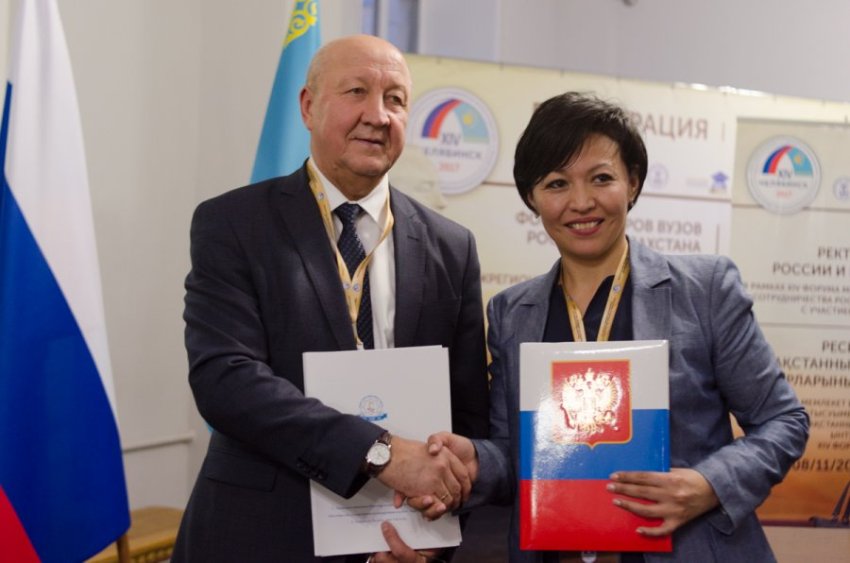 Tomorrow, on November 9, the 14th Russia-Kazakhstan Interregional Cooperation Forum will continue its work.

Photos from the Forum