“Study, and You Will be Go-Getters Your Whole Life,” – SUSU Graduate, Professor of the University of Michigan, Sergey Gladyshev 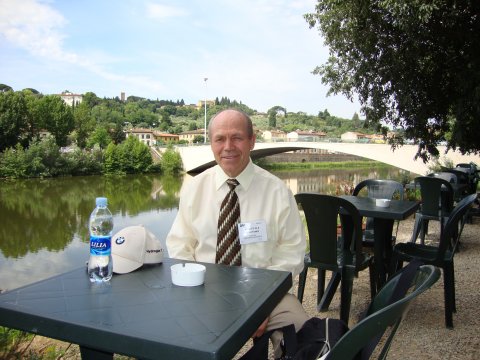 SUSU graduates are respected for their professionalism far outside of the borders of Russia. Among them is Sergey Gladyshev, who graduated from the SUSU Faculty of Instrument Building in the program Automation and Telemetry. He successfully built a career for himself in his alma mater, having laid the foundation for a new area of training, and then went to master new heights of science in the United States of America. Today professor of the University of Michigan Sergey Gladyshev remembers his alma mater with thanks.

– Why did you choose SUSU for your education?

– I was born in Korkino, a small city in the Chelyabinsk region. For me, the idea of higher education as always tied only to SUSU. At this time, the world saw satellites for the first time, and the first flight by Gagarin was completed, which, of course, really inspired me. These events, which were so important to humanity, made it necessary to master new programs such as automation and telemetry, regulation systems, measurement technology, and computing technology. I made the choice of automation and telemetry, since wireless control and the transfer of commands at a distance was of great interest to me. The only place where this program was taught in Chelyabinsk was the Polytechnic Institute (now SUSU). After my army service, I decided to apply there.

– Was it difficult for you as a graduate from a rural area to enroll and study at SUSU?

– I prepared carefully for my university enrollment, especially in the area of mathematics, and I completed all my exams successfully. At that time, the SUSU main building was still being built, but it left an impression on me already. I understood that I had enrolled in the right place. The academic process was not easy, especially with a major textbook shortage. In the mornings, we went to the library and got in line. The reading room was always overfilled. Today we remember this with a smile.

The requirements for students were high, studying was very serious, so lazy students did not complete their education. Working on my final project, I stumbled upon the theory of regulation and this became a hobby. Then, I enrolled in the postgraduate program and in the doctoral program and figured out transducer technology and the theory of regulation well. After graduating from university, it was offered that I remain at the university. I accepted this proposition, and all of the rest of my life turned out to be tied to SUSU.

– Who among the teachers and, maybe, students, do you still remember?

– I remember one student who studied with me very well. Now, he’s the rector of the university. Aleksandr Shestakov completed laboratory work with me. He was a very good student – one of the best.

– What was the most important lesson you had in university?

– Love towards learning. I think that people should study until their final days, which is what I am doing. Live and learn. Right now, I’m working in an American university. The task before us is to prepare students for the fact that they will be studying their whole lives. I meet students who are already around 50 years old. They, and their younger classmates, study together, and no one is surprised by this.

– And are they not surprised by the fact that a Russian professor is teaching them? How did you become a professor at the University of Michigan.

– As I already said, after graduating I stayed at the department. After defending my doctoral thesis, I became head of the department. In addition, I was also part of the scientific and methodological council for the Ministry of Education and Science for electrical engineering. I opened a new program at the university which was called Electronic Microprocessor Management Systems for Autommobiles and Tractors. In the 90s I was one of the organizers and members of the Academy of Electrotechnical Sciences. So, for 100 years already, the Society of Automotive Engineers has been holding annual conferences in Detroit, in which I began to regularly participate with presentations on the topic of electronic microprocessor management systems at the end of the 80s. During my business trips I visited local universities, asked about the academic process, and looked at laboratories. In 91 I went to Detroit for a year-long internship through an exchange program, after which they asked me to stay at the university. I began to live here with my family when I was 61, and I have been teaching at the University of Michigan for 18 years already. However, I am still a member of the Academic Council for the Defense of Doctors’ Dissertations at SUSU.

– Is it difficult to teach in English?

– Of course, learning English at 60 is not a simple task. In the first year, I only ran laboratory work. Then I started to offer lectures in electrical engineering, regulation, measurement, and electric cars. All of these courses are in one department. I want to note that the engineering education that was given to us over the five or six years in our specialist program was significantly higher quality than the four-year American bachelor’s degree. Here, students have a compressed program, many things are cut in the first stage of education. Nonetheless, students here are neither worse nor better.

– What do you wish students of SUSU?

– Study, and you will be a go-getter your whole life. This is very important for success. Don’t just wait around. Take matters into your own hands. This will lead you to success no matter where you are working.