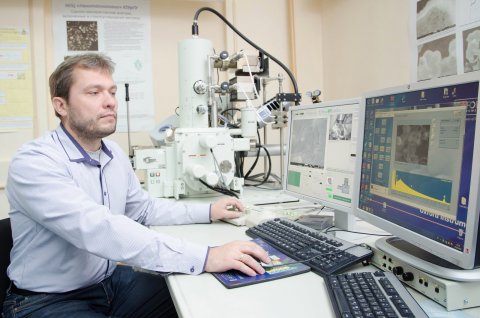 Researchers never rest. You can make this conclusion by walking through the university’s corridors in the summer months. Work is brewing at SEC Nanotechnologies at South Ural State University no matter the time of year.

Dmitriy Zherebtsov, senior researcher of the Department of Materials Science and Physical Chemistry of Materials, engineer of the SEC Nanotechnologies, told us that SUSU’S group of chemists is searching for new crystallized forms of carbon.

What is a vat dye?

For around a year now a new direction tied to researching methods for obtaining new carbon and organic materials has been developing at the Science and Education Center Nanotechnology. Such materials can be obtained from vat dyes, with which society has long been dying textiles and plastics, and also can be used for inkjet and laser printers.

“Vat dyes are interesting in that their molecules look like flat sections of graphene, which consists of interconnected hexagons, of which there can be from 6 to 12. From them, we can obtain new chemical substances which are still unknown to modern science,” says Dmitriy Anatolyevich.

Up until now, only 3 crystalline forms of carbon are known: diamond, graphite, and, just recently joining them – fullerene. All of its other forms are non-crystalline x-ray amorphous substances. For example, soot, glass carbon, and nanotubes. These substances do not have Long-range three-dimensional order in atom alignment.

One of the areas in which Dmitriy Zherebtsov and his colleagues are working is in the formation of polymeric organic crystals based on vat dyes, which turn into carbon under firing and will have a crystal lattice for the resulting organic crystals different from that of diamond or graphite.

“Fullerenes were discovered in 1985 and nanotubes in 1991 – both of these discoveries gave chemistry a huge push forward. We set a high bar for ourselves – discover a new class of carbon materials. They must be in the same row with the class of diamonds, graphite, fullerenes, and nanotubes. We call them ‘a new class of crystalline forms of carbon.’ There has not yet been a publication in the world on this topic, so if we are successful, we have a good chance to beat our foreign colleagues,” says Dmitriy Anatolyevich.

This year, the university is bringing together 12 postdocs from all around the world for the development of the university’s priority areas of work. Dmitriy’s team had the chance to invite a young PhD from India with high ratings – Sakthi Dharan.

“Thanks to the SUSU Office of International Partnership and help from a large international recruiting agency, in literally 10 days we had more than 10 applications. We chose one researcher from India. In September he will already begin working at SUSU for 2 years,” explains Dmitriy Zherebtsov.

The international colleague will help our researchers synthesize a new class of crystalline forms of carbon and a class of highly-active aromatic substances. No, this is not perfume, but a serious organic chemical. It’s just that molecularly-interconnected hexagons in carbon rings are called aromatic systems.

The new aromatic materials will have unique physical characteristics – good electrical conductivity, relatively high magnetic susceptibility, the ability to absorb light, and generation of an electron-hole pair. These characteristics will depend on the orientation of the crystal. In the future, they could be used in various sensors and instruments, liquid crystal devices, and in solar energy.

Nanofilters for the navy 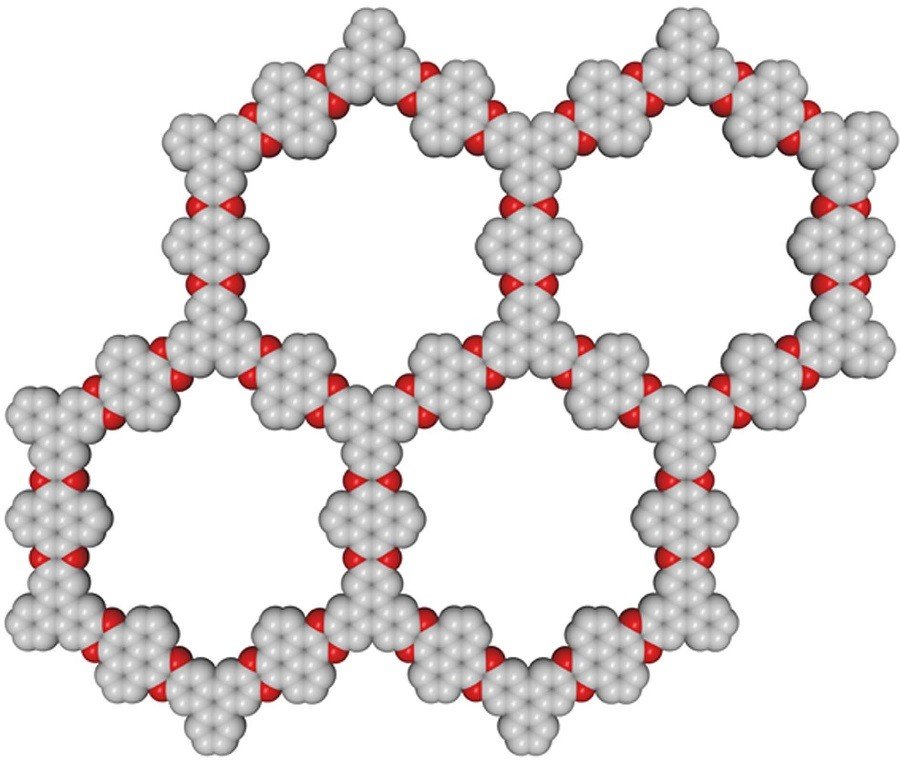 One of the crystalline forms of organic polymers that Dmitriy and Sakthi Dharan will research is Covalent organic frameworks (COF), which are a popular area in chemistry over the last 15 years. The idea of this is that something forms which is similar to a layered crystal of graphite in qhich the corners of cells are formed not by single atoms of carbon but by a collective from many atoms – aromatic molecules. The difficult task researchers must complete is to choose particular molecules to obtain COF which save under calcination their intact carbon skeleton. From this crystal it will be possible to peel off single layers just like peeling graphite layer. However, not a single molecule can penetrate a graphene sheet.

“If we create a new crystal with a certain pore size in layers, then all smaller molecules – for example, water – can get through these pores. Larger molecules simply will not pass through. This means that various viruses will not be able to pass through this filter. We get something like film membrane technologies which have been known for a long time, but such things have never been created on the nano level in single-layer carbon films.”

Nanofilters can reduce the size and mass of air cleaning and salt water desalination plants, which exist in many coastal cities, aircraft carriers, and submarines, by 100-1000 times.

South Ural region researchers have already applied for a joint grant with Taiwan and have completed 22 preliminary experiments, thanks to which they saw new issues and planned new approaches to solve them. For example, to create a crystalline material you need to firmly secure molecules in crystals, and sew them together in the hard state so that under heat, decomposing into carbon, the don’t lose their order, but instead save the structure of the original crystal.