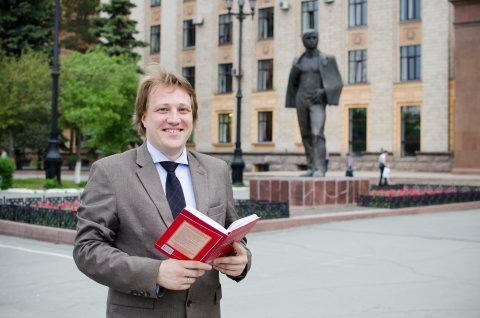 Tikhon Podshivalov, candidate of legal sciences, head of the Laboratory of Private Law, received a grant as the winner of the contest Support of Young Science within the 5-100 Project. He offered the study of the effects of the good faith principle as a criterion for lawful human behavior.

All citizens, as everyone knows, must follow the laws of their country. There is one other well-known fact – there are various loopholes that can be found in Russian law that allow people to go around the laws. Tikhon Podshivalov is developing methods of removing such “spots”:

«There is even one moment – one person creates a law, the rest of the people think up how to avoid it. To nullify this, the principle of good faith has been introduced as a method for protecting against schemers and crooks who are trying to think up interesting schemes to avoid the law,» explains the researcher.

This research is of great interest in the international scientific community and has serious promise. This was studied before, but researchers got themselves into a logical stupor. This was all because the principle of good faith, as a category of moral qualities, started to be regarded as a criterion for lawful behavior. So now, this principle is considered a legal category – this is considered more productive.

«Abroad, there is no distinct division between private and public law, civil and criminal. There, the principle of good faith is becoming universal. In Russia, this same principle has become widespread in civil law in particular,» says Tikhon Petrovich.

The introduction of the principle of good faith allows such difficult legal frameworks as estopple, pre-contractual liability, lifting the corporate veil, beneficiary property, legitimate expectation, and others to be used in practice. These doctrines are simply mandatory for Russian civil law.

«For example, lifting the corporate veil is a situation where a legal entity has accumulated debt and does not have property to return it. But, it has a founder, who has his or her own property. This doctrine and the principle of good faith allows funds to be recovered not from legal entities but from the founder who is controlling it. These kinds of interesting legal frameworks could not exist if the principle of good faith was not cemented into law,» says Tikhon Podshivalov.

Tikhon Petrovich’s research is original in that the principle of good faith is not considered a moral or ethical category. The research is being completed based on economic analysis of law. This is a modern phenomenon in law – law and economics, where the cornerstone is property loss.

«The thing is that given the modern development of civil law and legal professionalism, it is quite difficult to find the line between breaking the law and following it formally. We have a so-called “grey area”, where formally, the law has not been broken, but there are negative side-effects: losses and property losses. This grey zone has not been regulated in Russia at all. Introducing the principle of good faith, we can say that performing certain actions which are formally not breaking the law, but have some negative consequences, are prohibited!» explains Tikhon Petrovich.

Tikhon Podshivalov, his laboratory, and the Department of Civil Law and Civil Legal Proceedings are actively working on this issue with the Arbitration Court of the Chelyabinsk Region.

Together they have already created 2 overviews of judicial practice in procedural abuse and norms of circumvention of the law. Now, the researcher is planning on working with the Notary Chamber on questions of inheritance, disposition of shares in residential areas, and so on. This is all done so lawyers can create a base for future reduction of these grey areas that exist on the edge of the law.