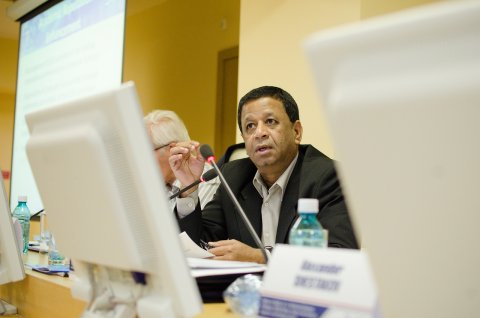 One of the visitors to SUSU as part of the International Research Council was physical chemist Muthupandian Ashokkumar, who visited the South Ural capital from the University of Melbourne (Australia). The researcher’s specialty is the production of materials for food and dairy manufacturing.

– Tell us about your partnership with SUSU and future collaborations.

– My research is related partially to food technologies and partially to biomedicine. Right now I am actively collaborating with professor Irina Potoroko, who works in the area of food biotechnology. We have been collaborating for more than three years already. First and foremost, we are studying the possibility of using ultrasound to increase the quality and nutritional value of food products. For example, we can use ultrasound to chance the functional properties of proteins and the structure of fats and carbohydrates. Beyond that we can deliver nutrients through the food matrix using incapsulation technology. For example, we can make a nutritional emulsion for the elderly and children and deliver it with yogurt. This is the area we are researching in my collaboration with SUSU.

– What role does SUSU play in solving global issues standing before humanity?

– As you know, the world is on the brink of two global catastrophes. One of them is significant climate change, the other relates to electricity. Many universities are researching solutions to these issues. For example, they are studying the effect of climate change on precipitation, the environment, and people’s lives. We are trying to predict certain outcomes of global changes on nature. One example I can note is research looking at the increasing number of plants in regions and the subsequent impact of these changes on individuals.

SUSU is in a industrially-active city: the factories affect the ecology and can damage the region’s environment and affect the safety of food products. So the university’s researchers can study reducing the negative effects of industry on nature. They can also study industrial safety.

– You research sonochemistry which is often called «green chemistry». Why is it important and in which areas is it applied?

– I will give a simple example. When we are talking, there are soundwaves occurring. Those waves that are not registered by our hearing are called ultrasound. Ultrasound can cause chemical reactions if you direct it at the right substances. Sonochemistry studies the processes that occur.

By using ultrasound we are not adding chemicals to intensify processes, which means that this chemistry can be called «green». Today there are many different applications for ultrasound. For example, we use ultrasound to scan the human body, generating chemical reactions in the body. In this way, these reactions can be controlled. Ultrasound is also used in biomedicine, the food industry, and in different areas of life. Ultrasound has positive effects in its various areas of applications. This is why many universities are studying the use of ultrasound to solve the issues and needs of society relating to energy, food, and materials.

– You are a member of the International Research Council. Tell us about the positive changes at SUSU that have occurred during your partnership. What should the university work on?

– We evaluated SUSU’s activities within the first meeting and gave our recommendations on how to increase its efficiency, including in research. For example, the university planned on implementing an excessive number of programs, and we suggested reducing the number and emphasizing the main areas of work. Nine months later we saw presentations of the results of work in various areas, noting significant changes that are difficult to achieve even over three years. I want to congratulate the university on these significant changes. We really saw positive changes and we can say that SUSU is on the right path. I’m sure that the university will make a big contribution to the region’s development and will broaden its international presence.

– What skills does the modern student need to build a successful career in science?

– When they begin studying, it’s difficult for students to imagine how their career will proceed. So, first of all, they need to determine where their heart is and then make some long-term goals. It’s not important who a person wants to become – a researcher, engineer, economist, or an industrial worker. In any area, the criteria for success are hard work and determination.

There are many obstacles in life. At times, things don’t go how we want, so we need to be persistent. You need to remember your hard work. Opportunities always appear. You can’t ignore the chances that come, you have to dive in to them with your head and achieve the goals you’ve set.

– How is SUSU seen by the international community? How can the university attract foreign researchers?

– At this time SUSU is developing actively and improving its position in the international arena. This involves international ratings, the quality of publications, and academic mobility. In all areas, SUSU is moving forward. However, this process takes time. You cannot achieve the end goal within a year, we are talking about constant work. At my university, a ten-year plan is being developed. For example, if we want to be among the top 50 universities in the world, we develop all of the possible strategies for this ten-year period. This is the path that SUSU is taking, as well. The university has set strategic targets for the next five-ten years. As a member of the IRC I can say that SUSU is on the right path. The leadership of the university work together efficiently, this is a very positive interaction. Believe me, in just a few years society will see the results of this work. One more moment I want to note relates to high international competition. Russian and international universities are fighting for their «spot in the sun». I believe that SUSU’s capabilities in material science, computer science, and the food industry are huge, and concentrating their efforts on research in these areas will make the university a leader in the region, Russia, and in the world.