From Quantum Entanglement to Tendencies of Industry 4.0 From June 12th through 15th a few notable events occurred at South Ural State University: another meeting - the third - of the International Research Council, a meeting of the Supervisory Council, and lectures and seminars by IRC members – world-renowned researchers who work in the most advanced areas of science and technology including chemistry, biomedicine, and quantum information sciences.

According to university rector Aleksandr Shestakov, the IRC was created a year ago to coordinate the university’s academics and research according to the best world practices.

“There is a council formed at every partner-university of the 5-100 Project, which will help Russian higher education institutions enter the top-100 in university rankings before 2020. We value the recommendations of our international experts highly. The IRC members always try to dive deep into our topics and give us professional advice. Their opinions, experience, and understanding of scientific trends are very important for the university’s development,” said Aleksandr Leonidovich.

The SUSU International Research Council includes 11 leading international researchers with a lot of experience in fundamental and computer sciences, engineering, and medicine. Of these 11, 5 came to Chelyabinsk for the third meeting of the IRC: president of the Emerson corporation Edward L. Monser; acting president of the KIAS University in Seoul, Dr. Jaewan Kim, whose scientific interests are tied to quantum information sciences; University of Leiden professor Dr. Ron de Kloet, who studies the rise of human resistance to diseases triggered by stress and is famous for his discoveries in the study of the effects of stress on the brain; specialist in organic chemistry, editor of the journals Molecules and ARKIVOC, Dr. Panayiotis Andreas Koutentis from the University of Cyprus; Dr. Ashokkumar Muthupandian from the University of Melbourne, physical chemist specializing in sonochemistry who has contributed much to the creation of materials for food and milk production; and, participating through a video conference, Maria Josefa Yzuel from the University of Barcelona, physicist, specialist in optics.

Over three days, the members of the Council discussed the results of the university's work from last year and also carefully studied the process of realizing a few large scientific projects at SUSU to offer their expert opinion. The vice rector noted that over the last year, more than 70 events have been held at SUSU dedicated to building a new organizational structure, the creation of independent management bodies, the formation of elite training zones for bachelor’s students, and in bringing young workers into research.

In addition, individual presentations made by SUSU representatives on the first day of the Council were dedicated to bringing in talented applicants, international cooperation, and the university’s positioning.

“We considered issues tied to the university’s developmental strategy as a whole and in terms of academics, science, and international relations. We also discussed improving SUSU’s position in the international rankings. The experts, in my opinion, listed to the presentations by the leadership and university representatives with interest and gave very important recommendations which will lie at the base of the ‘road map’ that we are currently developing within the 5-100 Project,” said Andrey Keller.

Andrey Vladimirovich also noted that the recommendations of the international experts touched on the relationship between teaching staff’s academic load and their scientific activity. The members of the council, referring to the example of the world’s leading research centers, called for more time and funds to be used in the latter: increase the financing of promising research areas, and also the number of hours spent on them. The question stood: should this be done with government funding or from businesses? On the one hand, universities should not depend on the changing needs of industry. On the other – it is applied research in particular that is helpful. The opinion was stated that it is possible to combine the two options. In addition, the researchers tried to determine the path of development for scientific areas that would meet the region’s interests and also support the solution of global issues. The topics brought up were more thoroughly explored later in sessions.

The meeting’s participants stated that the intermediate results of the university’s work could confidently be called impressive. The SUSU leadership, in their opinion, has done a lot of work, not just changing the structure of the university in a short period of time, but also convincing the staff of the necessity and positive effects of this change.

They also spoke about the strategies to move the university up in the international ratings. In particular, the members of the Council discussed the possible ways to enter the general and field-specific QS ratings. The rector noted that materials science is one of the most promising areas of the university’s research in this respect, and SUSU has a good chance of taking a high position in this rating.

Aleksandr Leonidovich clarified that thanks to the fact that the university has both technical and humanitarian institutes and schools, SUSU can gain popularity from solving global issues in engineering, information technology, and migration studies. In addition, the council members asked where students live, whether or not they receive scholarships, if they work or not, and if they are able to spend enough time on research. They were told about the university’s dormitories, the contract and government-funded study options, and the university’s partnerships with potential employers.

“Striving towards development is the main trend of modern society. While you stand in place, the world is moving forward. SUSU is a shining example of a university whose leadership caught on to these trends on time and lead the whole university team in a new direction. One more important component of success is well-built communications among university staff. In this area, South Ural State University has also succeeded,” said Edward L. Monser. 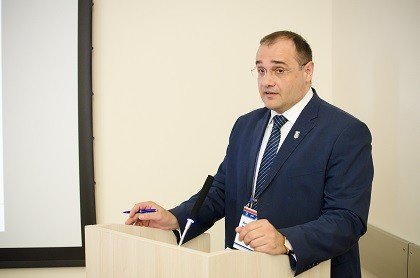 A meeting of the South Ural State University Supervisory Council was held under the leadership of the president of the Business Council of the Eurasian Economic Union, graduate of ChPI (SUSU), Viktor Khristenko.

The summer is a special time for academic institutes: the academic year winds down, and the admissions campaign opens. This is the time to summarize past results and plan the future.

“This is a time when it is worth preparing the foundations for solving all issues related to the university budget for the next year and the completion and submission of all applications – and in this sense, it’s no accident that the Supervisory Council meets in the middle of June. It is necessary to work out all of the issues tied to financial reports, property, and changes to financial plans, and also discuss what was done in the last year and what remains to be done in the future,” said Victor Borisovich.

According to him, the work done by the university can be given, without question, positive ratings:

“It’s important to me that we here are keeping pace with the times and following what is occurring right now and they are trying to guess what will be in demand tomorrow. In this respect, I think that the last two years were the most helpful for the university. SUSU gets an A+ for how they traveled this road of trial and error. This search for one’s path is worthy of respect.” Meanwhile, the members of the International Research Council continued their work at SUSU, met with university, city, and regional journalists, and talked about their partnership with the university and the leading research in various areas of science.

Professor of the Royal Netherlands Academy of Art and Science and the Department of Medical Pharmacology at LACDR/LUMC at Leiden University, Dr. Ron De Kloet, noted that he is happy to discuss the prospects of studying stress and its effect on the brain with students and professors of the SUSU School of Medical Biology. 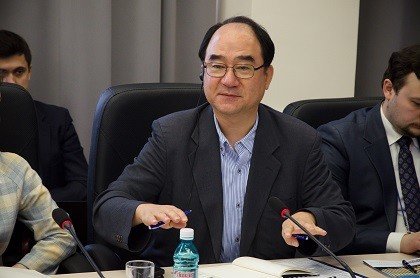 Professor of the Department of Computational Sciences at the Korea Institute for Advanced Study and the ex-director of the KIAS Open Center, acting president of KIAS, Dr. Jaewan Kim talked about the various areas of application for quantum information sciences. The researcher also noted South Ural State University’s advantageous geographical location – between Europe and Asia, the activity of its young researchers and staff, and its dynamic development. These factors, according to the researcher, will have a positive impact on SUSU’s scientific prospects.

Professor of the Department of Organic Chemistry at the University of Cyprus, Panayiotis A. Koutentis, illuminated the tasks and prospects of developing chemistry at SUSU and noted that the university’s capabilities will allow it to lead breakthrough research, but students and young researchers will need to work hard and spend a lot of time to achieve great results in the scientific arena. 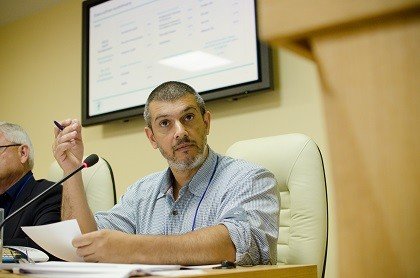 Members of the IRC also held open lectures for students and seminars for university staff. The President of the Emerson corporation dedicated his presentation to the fourth industrial revolution and the industrial Internet of Things; Dr. Panayiotis A. Koutentis – to the prospective areas of development for chemistry; Dr. Ron de Kloet talked about the psychoneuroendocrinology of stress; Dr. Muthupandian Ashokkumar about the basics and methods of applying ultrasonic treatment to the creation of food products and functional materials; and Dr. Jaewan Kim helped future IT specialists dive into the world of quantum information sciences.

After discussion with their young colleagues, the international guests visited the museum “Peoples and Technologies of the South Ural Region,” whose exhibition was of great interest to the researchers and left a strong impression. “SUSU has the potential to do much more, move much more actively and quickly towards the goals set within the 5-100 Project.”

“We had three days of intensive and creative work on evaluating the university’s current condition and prospects for its development,” said SUSU rector Aleksandr Shestakov, summarizing the results of the International Research Council, “We demonstrated that we have made the first step in realizing the 5-100 Project goals. Because of our discussions, we have found some very promising areas of work which will be helpful to both our university and our country. It’s tied to digital economy, digital manufacturing – this is a novel approach in the fourth industrial revolution. We have discussed this topic with the scientific community, with representatives of manufacturing organizations, and found industrial partners, which is very important. We enlisted the support of the Emerson corporation, which is a leader in this trend around the world. Now, this is one of the key areas of development at SUSU, and we know what we must do.”

Now, according to the university’s leader, we need to have a good dynamic. For example, in science – this means increasing publication activity and receiving funds to complete scientific and design work.

“Our next task is to analyze the previous stage of our development and the trends existing in the scientific community, adopting the positive experience of other universities, and preparing well for the defense of our road map for the next three years,” noted Aleksandr Leonidovich.

There will be similar meetings by the International Research Council and lectures held a few times every year.