This Topic is the Future: Doctor Jaewan Kim on Quantum Entanglement 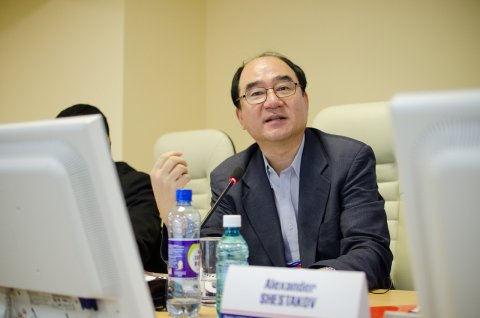 On June 13th, doctor Jaewan Kim, professor of the school of computational sciences at the Korea Institute for Advanced Study (South Korea) held a lecture on quantum entanglement for our university’s students and staff as part of the International Research Council.

Quantum mechanics was the basic principle of science and technology in the 20th century, especially for information technology. But the application of quantum mechanics is limited by information technology hardware such as semiconductor devices and lasers. Now, quantum mechanics will control all aspects of computer science, and not just hardware, but software and operating systems, too. The most important resource for quantum information science and technology is quantum entanglement. Quantum entanglement is a new kind of correlation presented to us by quantum physics which is impossible to imitate by any classical means. In his lecture, professor Kim presented the brief concept of quantum entanglement and a few examples for its use, such as quantum teleportation, quantum visualization, and quantum cryptography.

“There are not many people who understand quantum teleportation, but in the future it can be used for communication across large distances,” noted Jaewan Kim.

The professor’s lecture was of interest to the audience. Students asked questions about the physical possibilities of teleportation, about the conflicts to classical physics, and many more.