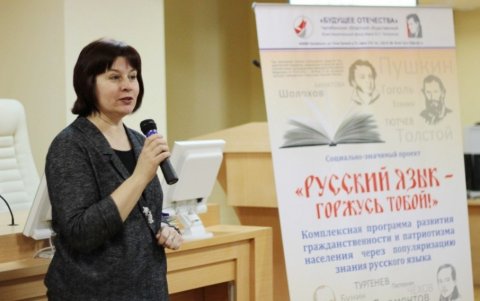 On May 24th, the Day of Slavic Literacy is celebrated. This is a holiday dedicated to Cyril and Methodius who are the creators of the first Cyrillic alphabet. Today, Russian language is also studied by international students. We spoke with the head of the Department of Russian as a Foreign Language of the SUSU Institute Linguistics and International Communication Elena Kharchenko about how foreign students perceive Russian language.

– Why is Russian as a foreign language unique?

– We often forget that Russian is one of the most difficult languages in the world. We have flexible stress, rather than fixed, difficult grammar, and many exceptions. The language itself is a synthetic one, which is shown in the many endings which we choose without thinking, while a foreigner must learn everything. This all creates difficulties when learning. This is why we are trying to make the process into a process of discovery. The most difficult thing on the first stage for them is the word “pre-po-da-va-tel-ni-tsa”. This victory gives them such happiness. We try to preserve the sparkle in their eyes and not scare them right away, and not talk about how the whole system of cases and conjugations still waiting for them.

It helps to immerse yourself in Russian culture, which is of great interest. The Institute holds many events which bring together people from different countries. Very quickly, Russian becomes the bridge. It’s funny when people from different countries try to talk to people using phrases from the textbook: “What’s your name?”, “What country are you from?”. From the point of view of language didactics we use a communicative, sociocultural approach, and the teachers really put in their soul into the teaching, every time opening up this not-so-simple Russian language for themselves. The Center of Sociocultural Adaptation also really helps. The efforts of the organizers and volunteers make it much easier for international students to live through cultural shock.

– What difficulties occur among international students when they begin studying Russian language?

– The difficulties are usually tied to overcoming the language system that they’re used to. Every person who has studied English remembers how difficult it is for us to distinguish long vowels which in English can change the meaning of a word – say a sound a bit longer, and a different word can appear. So we try to take the students’ language systems into account. It’s difficult to change habits, the student’s native language system is always pressuring students – he is trying to adjust and use what he already has and apply it to the new language. There is some difficulty in differentiating vowel and consonant sounds. International students don’t differentiate so easily – for them, the word “baba” and “papa” sound absolutely the same. In pronunciation the top spot goes to the sound “r”, and for many the soft “l” is difficult, and also different soft sounds, especially if those sounds don’t exist in their native language. In many languages, there is no separation of inanimate nouns by genders. Try to explain why, when you are naming the item in front of you “stol”, that is masculine – but if you say “parta” – then that same item is now feminine.

Students have to get used to our system of education. In many countries, the reproductive system of education dominates, in which emphasis is on memorization. And our methods of education are perceived as unusual. For Chinese students, who have already studied our language in their country, speaking and listening are the most difficult, since in their home country they spend the most part of their time writing and reading. There are some funny situations in lessons where we don’t take special characteristics of a different country into account. Chinese students are often scared of our loud speech and rich facial expressions with gestures. For them, loud speech symbolizes the teacher’s disappointment, and we try to speak even louder, thinking that they will understand us better. Chinese students do not ask the professor questions so as to not lead to questions of their competence – imagine what they think about us when we tell them to ask us question. There is a special place for how people are addressed. In China, one’s position is quite important, people are addressed by the name of their position and their last name. Referring to someone by just their name or by name and patronymic is considered impolite. And our teachers think that they call us “teacher” because they have forgotten our name and patronymic. In every culture there are such moments which much be taken into account.

– How does ILIC note the Day of Slavic Writing?

– We always bring international students in to our holidays and include them in our culture. May 24 will be a general holiday for the Institute of Linguistics and International Communication, which will be prepared by Russian and international students. There will be many surprises, for example, international students will be singing Russian folk songs and show us Russian traditional dance. There will also be traditional calligraphy contest. International students respond quickly to the contests we hold. This also motivates them in their Russian studies. Right now we are holding an essay contest entitled “What surprised me in Russia,” and it’s too early to share the results, but I can say that it is very interesting for us to read these observations – there are some very unique ones. The main thing, in my opinion, is that thanks to Russian we can get to know one another and about one another.