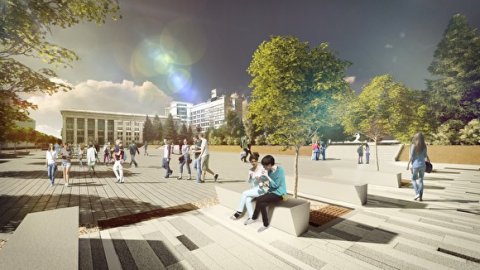 A team of students from South Ural State University who won an international competition for young architects in Milan at the end of April have received a special award from KB Strelka. The award marked the team’s participation in an open, national architecture competition to develop a concept for the improvement of key public spaces in 15 Russian cities. The students and graduates of the South Ural State University Faculty of Architecture presented their vision of how Chelyabinsk’s Revolution Square should be re-imagined.

The concept presented by this team involved fairly radical changes to Chelyabinsk’s central square. In particular they talked about shifting movement along Prospekt Lenina undergound and joining the pedestrian space with the local Arbat – Kirovka. Major changes were also suggested for the park portion of the square: in particular, in place of the existing musical light fountain the students recommended building a small pond which, according to the authors’ ideas, would liven up the square with its reflective water. On the Theatre Square, adjacent to the square to the south, the competitors offered taking away the parking areas, vegetate the square, and creating on the square conditions for more active and diverse use.

In the message received by competitors it was stated that the jury, consisting of representatives of the Chelyabinsk administration, and also the Russian Ministry of Construction, the Agency of Mortgate housing Lending, and KB Strelka, noted the team lead by Margarita Mezeva in the category Strelka Special Mention. On the contest site, it was also state that first place by jury vote was given to the creative team of Nikita Moroz, second place as the winner in the public vote was the institute UralNIIStromProyekt under leadership of Vasiliy Vazhenin.

Earlier it was noted that the group of students from the SUSU Faculty of Architecture lead by Dmitriy Agarkoviy received first place in an international competition among 182 projects for a new living complex in Milan. The concept of a high building with a few kinds of housing which should appear in the location of a former parking lot in the active and developing business area of the city won the competition. Then it was noted, that this was a final degree project, which just needed to be defended in the Faculty of Architecture.

Materials from the site www.znak.com