“Museums are the Treasures of our Memory”: SUSU Archaeologists Celebrate their Professional Holiday

Archaeologist Aleksandr Tairov, doctor of historical sciences, director of the Eurasian Studies Research Center of the SUSU Institute of Socio-Humanitarian Sciences, has been completing digs in the South Ural region for many years. Among his “spoils” are some completely unique and surprising finds. Aleksandr Dmitriyevich told us about what a museum is in his understanding, how people find their roots and what a gorit is.

– Aleksandr, yesterday, the whole world celebrated Museum Day. What does this mean for you and how do you celebrate it?

– First of all, we have to figure out, what do museums mean for people? A museum is a place that preserves our history. That means that a museum is an archive for our memory. And memory is focused on the things that people used in the early ages. Museums are one of the most valuable cultural properties for humanity. When people want to destroy the memory of some people and its government they, first and foremost, destroy its history, museums, and monuments. Unfortunately, we are seeing this in the Middle East where ancient monuments are being destroyed.

On International Museum Day, we remember that we have a huge cultural and historical heritage which was passed to us from our ancestors. We remember the people who founded museums and who work there now. This is a way we thank them.

On this day, there are special events that happen annually: people can gift museums some kinds of things that they received from their relatives or that they found by chance. They are able to make a contribution to the “treasure of our memory”

Our museum, Peoples and Technology of the Ural Region also receives such items. We have exhibits that are not archaeological finds, but have already disappeared from man’s daily life. We try and preserve these things because through them, we can trace how such an item has been used from ancient times to modernity. This is done so that man doesn’t forget that everything that he has is the creation of our ancestors – except computer technology of course.

On this holiday, we congratulate one another and sit down for tea. Since the Eurasian Studies Research Center is directly tied to museum work, we consider this to be our holiday, too.

– Have people begun visiting museums more often in the last 10 years? Does modern man want to associate with history and culture?

– Yes, without question! Recently we have noticed people’s interest in their history, their region, and the history of their country.

Right now, there is a new area in museum work that is actively developing where people may touch exhibits, feel them, work with them, and use them how they were used before. The thing is that you can see things well in a museum as they were in ancient times. It isn’t so simple in a picture, nor is it possible to touch them, after all, every piece stores the energy of the past within it. You can explore the things that your grandmas, grandpas, and great-grandmas used with your hands. It’s impossible to totally replace museums with pictures on the internet – you must see these things and see them with your eyes in person.

– The museum now uses computer technology to create unconventional projects: museum night, online excursions, quests, and so one. Do people need these, in your opinion?

– We need them – very much! The thing is that the more information people have about a museum and the history of their family, region, and homeland, the more educated he becomes. A person who does not know history or his own rots is a “tumbleweed”. A person who knows their roots finds soil – spirituality. The purpose of museums is finding these spiritual qualities. When a person knows his land and his ancestors, he begins to respect nature and animals. But if a person doesn’t know his roots, he doesn’t value everything that nature has given him. He may litter, set fire to the forest, write on monuments with paint. Because he doesn’t feel that this is his land, that it was given to him by the blood of our ancestors.

I am “for” any kind of “propaganda” of historical heritage: interactive lectures, 3D-excursions, quests, and so on. All of this prepares people to go to the museum, look at archaeological monuments, go on expeditions and see everything with their own eyes. This is where I see the huge positive value of museums and all of these modern methods to pass information on to visitors.

– What finds can you brag about? Do you have a favorite exhibit piece? 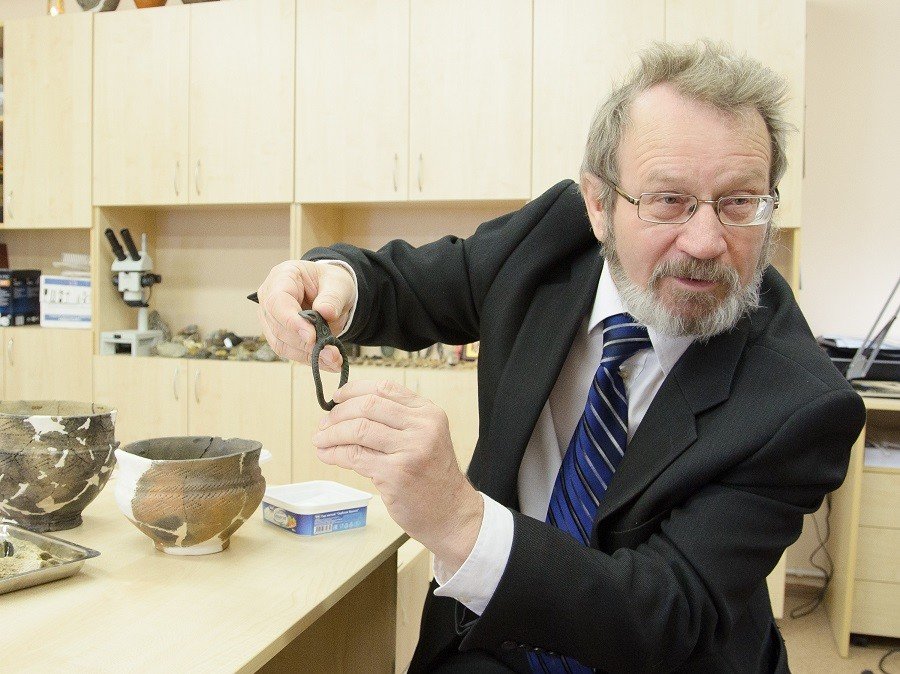 – I work won the early iron age. I have a plaque with a picture of a gorit – this is a container to store a bow and arrow. It is quite rare. It was created in roughly V-IV centuries BC. It was found in the Chelyabinsk region. 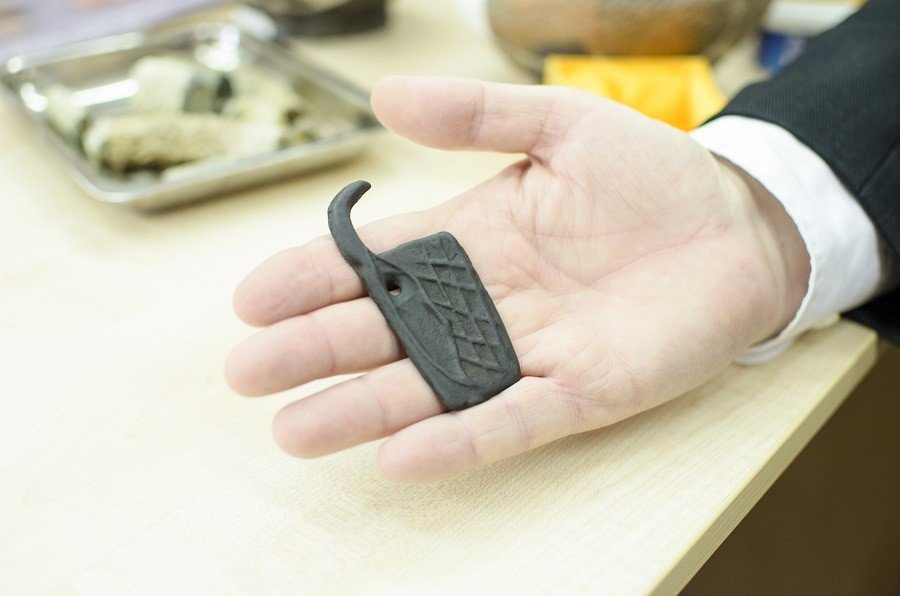 And this is a buckle that secures a saddle to a horse, found near Chelyabinsk. The most interesting thing is that it shows the head of an eagle, but his eyes are like the horns of a ram. This is an eagle-ram – the combination of two animals into one. This is a very original item of the VII-VI centuries BC.

We don’t just search for ancient items but also restore them. This is directly tied to museum work. After all, the goal of archaeology is not just to find items but to present them to people as well. Show them how they were used. 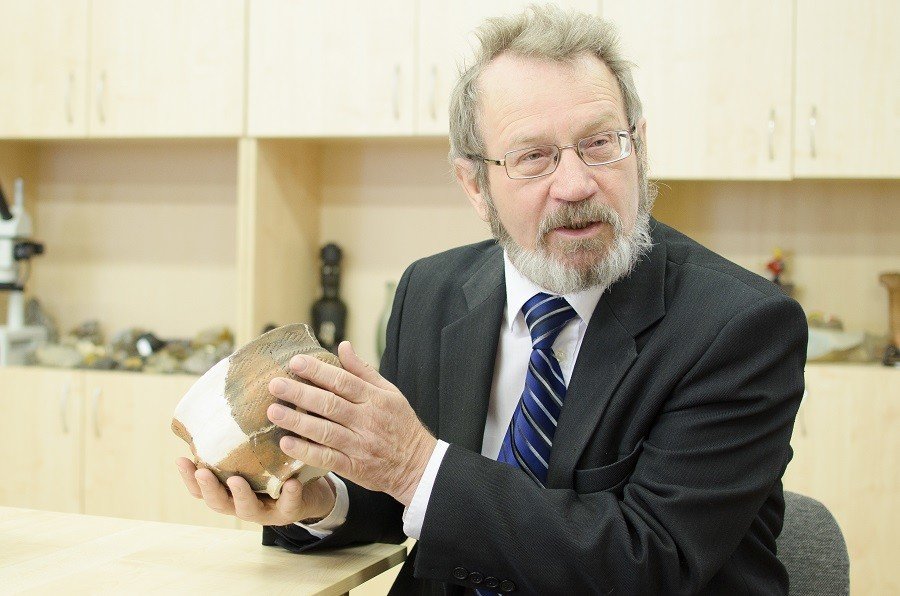 When we found these jars, a part of their fragments were missing. We glued them together, plastered it, and restored it. Now they can be shown in museums. In the Eurasian Studies Research Center we don’t just study items, we also restore them, conserve them, and only afterwards do they go into museum exhibitions.

– Your plans for the future – what do you want to do?

– The field season begins in June. We are planning digs in the Chelyabinsk region and monitoring of well-known monuments. What will come from this I cannot yet say. Archaeology is so unpredictable! But we hope that we will find something interesting to add to the collection of the Peoples and Technologies of the Ural Region museum. Right now we are included within the Russian museum fund and our museum is a total archive of antiquity and memory.