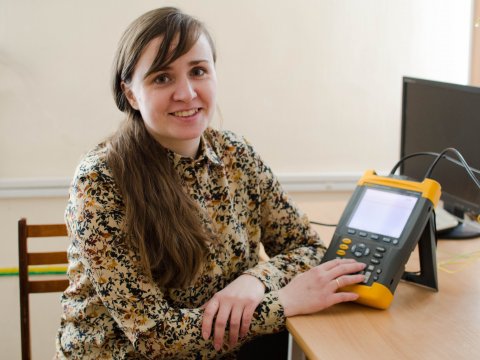 Tatiana Funk, associate professor of the Department of Electric Drives of the SUSU Polytechnic Institute is researching energy-conserving drives with indirect determination of displacement components. Having successfully defended her doctoral candidate thesis under the guidance of Doctor of Technical Sciences, professor Yuri Usynin, Tatiana Funk is continuing her important research. Today, the young researching is working to achieve the improved quality of the technological processes and improved indexes of resource and energy use for large mechanisms with minimal costs. Taking into account that the cost of energy in our country is constantly growing, questions of energy efficiency are very important for both manufacturing and for the country’s economy as a whole.

Not long ago, Tatiana Funk became one of the winners of the competition among young SUSU researchers held within the 5-100 Project. Her research was one of the most practically-significant. Today, there is a need to modernize a number of manufacturing mechanisms with ineffective, unregulated, and aging drive systems. Examples of such mechanisms are conveyer belts, hydraulic press pumps, compressors, compressed-air blowers, smoke exhausts, and more. Increased electrical use is characteristic for these examples. A move towards adjustable speed control will lead to noticeable economy of electrical use, in many cases up to 30 or 40%.

Questions of the indirect determination of displacement components in electric drive systems or questions of developing so-called sensorless systems are extremely important and helpful for Russian and international science and manufacturing, says Tatiana. This is proven by the monitoring she carries out on results of research work using the SciVal system which provides information from the Scopus database, access to which is ensured by the SUSU Scientific Library.

“Often, to accurately research a drive, differential equations describing the drive by a T-shaped equivalent circuit or by equations of general electric machines are not sufficient, since they do not have the accuracy necessary for such computations,” continues Tatiana, “Not so long ago, South Ural State University gained software from the company ANSYS which allow for the analysis of drive geometry using the finite elements method. We are interested in electromagnetic processes, so we use Electromagnetic Suite.”

ANSYS software allows users to study electromagnetic processes in close ties with mechanical displacements. Access to ANSYS products can be gained through remote access to the SUSU supercomputer.

“The mechanics of drives and electromagnetic processes can be studies and simulated very accurately thanks to the ANSYS software,” says Tatiana Funk, “To verify such computations, we use natural experiments, that is, we create a control board and connect it to a real drive which already has sufficient data.”

There are a few laboratories at the disposal of the Department of Electric Drives, fitted with modern equipment from world leaders in electrical energy. But Tatiana dreams of creating a new laboratory, or at least a part of a specialized complex for measuring equipment and indirect determination.

Tatiana’s plans also include working with a unified software which will allow for the use of both indirect methods and systems of using indirect measurement sensors and indirect computers and identifiers.

“In my opinion, the unification of modern measuring instruments and indirect determination of electric drive coordinates will allow for the creation of a system with the best indexes of regulation, improved performance and reliability of work, and the possibility of forecasting and determining the technical status of electromechanical systems,” says the young researcher.

Such systems have a use in metallurgy, metrology, polygraphy, the military and aerospace industries, medicine, electronic and semiconductor manufacturing, robotics, and in other areas.