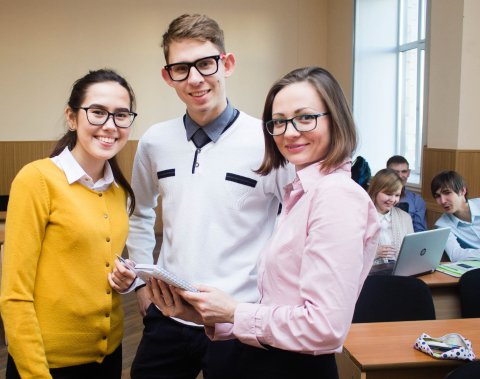 For many, chemistry and physics are just educational disciplines and boring lessons. For others it’s a path to life and the beginning of a successful career. Alevtina Keller, director of the SUSU Institute of Natural Sciences, tells us about how Chelyabinsk is gaining its own researchers and computer geniuses.

The best brought together at the INS

Last year, the life of South Ural State University changed. The largest university in the region entered the 5-100 Project, after which ten institutes were created within the university. One of them was the Institute of Natural Sciences (INS), bringing together three faculties: Mathematics, Mechanics, and Computer Sciences (MMCS); Physics; and Chemistry. Future researchers and computer geniuses will now be trained with triple strength.

“The faculties and their departments included in the INS have not been lost in the new structure and retained their status,” says director of the institute, Alevtina Keller, “The degree programs are 90% the same as they were previously, but new master’s programs were added, for example: Pedagogical Technologies for Advanced Study of Mathematics and Computer Sciences. During the formation of the institute’s structure, its development strategies, and concepts for teaching bachelor’s and master’s students, we saved all the best – we used the traditions from every faculty. Graduates of the institute, on the one hand, receive classical, fundamental education in mathematics and natural sciences, and on the other hand, they master modern IT technologies and work in new laboratories.”

The pride of the institute is its strong, scientific schools of mathematics, mechanics, physicists, and chemists. The scientific results of INS researchers are known around the whole world, shown by their high indexes of citation and personal invitations to international science forums. And the fact that the number of dissertation defenses is not getting smaller talks about the potential of the scientific ideas developing in these schools. There is always a competition to enroll in the post-graduate programs in this institute, and not just among graduates from our country’s universities, but also international universities.

A combination of fundamental mathematics and modern computer sciences allows students of the MMCS Faculty be competitive professionals not just in the first 3-5 years of work but throughout all of their career. Students choose different paths: university professor, programmers and developers, analysts, researchers, and school teachers. And sometimes, their skills in systematic thinking, analysis of a large amount of information, and the ability to find effective and logical solutions takes them to different areas of work.

However, in the INS the believe that looking for ideas and research skills will be helpful in any profession. Thanks to mentoring by professors, INS students make their first discoveries and publish them in scientific journals. The first steps into science are timid, sometimes by accident, but hen yesterday’s bachelor’s students successfully and confidently continue their research in master’s, graduate, and post-graduate programs at SUSU. Undergraduates, master’s students, and post-graduate students have a chance to work on their degrees and dissertations using modern high-tech research equipment created in Germany, Japan, the USA, Switzerland, and Russia. A combination of education and project work enables graduates to compete in the labor market of our region, our country, and the whole world.

Once a month, the SUSU Institute of Natural Sciences holds and open door day online. Taking part in this event, you can find out everything about the bachelor’s and master’s programs. An announcement and special link have been published in the group for the institute's application on social media sites.

Turning into leaders from a young age

The institute’s students take part in and win scientific competitions and Olympiads of various levels. Thanks to the Olympiad Training Center organized in the INS, in just the last 3 years, students have earned more than 70 prizes of various levels and accomplishments taking part in Olympiads around the whole world. For example, teams of the MMCS Faculty have entered the final of the World Championship of programming five times. The Championship is held by the international Association for Computing Machinery (ACM). Faculty students of the institute have won or entered the top three of Russian specialized Olympiads multiple times.

“Our students aren’t at all inferior to representatives of the country’s leading universities. In competitions, they participate on equal footing with MSU, SPbSU, and Novosibirsk State University. This once more confirms the high level of training which corresponds to international standards,” notes Alevtina Viktorovna, with pride.

A team of mathematics from SUSU INHS won the Russian Student Tournament of Mathematics Battles three times, have repeatedly won in the final of the Open International Mathematics Competition for University Students. Over the last 4 years they have won a total of one gold, four silvers, and five bronze medals.

Being successful in science, by the way, is honorable – the best students and participants of scientific conferences and championships at SUSU have a chance to receive an increased RF Presidential Scholarship, Government Scholarship, Legislative Assembly Scholarship, the Chelyabinsk City Administration Scholarship, and University Research Council Scholarship.

Study in the institute enables students to receive professional knowledge and forms the personality traits which are valued by all employers: resistance to stress, being ready for self-education, a high work ethic, and more.

“Of course, among students, there are some who are very talented, and some who came to their successes thanks to constant work and trying to achieve results,” says Alevtina Viktorovna, “We create a chance for all of our students to develop. For us, a special mentality and strong-willed character are important. I’m sure that our graduates can deal with any professional task in both their life and in their career.”

INS – the beginning of a successful career

It’s true that for many, career growth begins right after graduation. For example, the Faculty of Mathematics, Mechanics, and Computer Sciences supplies the labor market with specialists in the most in-demand professions – software developers, testers, and internet analysts. These qualified specialists are needed literally everywhere where a software product for computers is needed. Graduates of the faculties in the INS work as engineers and researchers and business analysts in various areas of the economies in Russia and abroad. Chemists and ecologists work in research institutes and laboratories including manufacturing companies and control bodies. Among graduates of the faculty of physics are many experts and specialists being trained in the maintenance and operation of computer systems for large manufacturing companies and engineering researchers. Many of them work in the laboratories of large international research centers in Russia and abroad, and others successfully run their own business.

In these areas, the hunt for prospective employees begins in the last years of study. There are employer meetings being held constantly at the INS, called Upgrade, which helps young people determine the beginning of their career. Businessmen and representatives of large companies from the ranks of business partners regularly hold meetings with students. The Career Center founded at the institute helps students with employment.

“Our students have no problem with work,” explains Alevtina Keller, “Many begin to earn some money in their free time while they are still students. The salary isn’t published, of course. But I know that the vast majority of our graduates receive more than 30,000 rubles in their first year after graduation. This is just the beginning. Can you imagine, how much the graduates earn after 3-5 years? By the way, our students have success very quickly in their professional careers – among recent graduates there are many heads of industry departments and firms.”

Besides the high level of teaching, the Institutes also applies an individual approach to each student. They don’t forget about the multi-sided development of these young people.

“The education of society’s intellectual elite – and that’s how I see our students and graduates – is impossible without improving their cultural level,” continues INS director Alevtina Keller, “We go to the theater with our students, to exhibitions, have informal meetings, see popular meetings, and even have culinary master-classes. For our first-year students who come to Chelyabinsk to study we hold excursions around the city.”

Despite the institute’s young age, the history of a few of its departments is directly tied to CPI [Chelyabinsk Polytechnic Institute was SUSU’s name up until 1997 – ed.] from the moment of its founding. In this time, students and teachers have developed their traditions. This includes, for example, professional holidays – Programmer’s Day Pi Day, Chemist’s Day, and many more. Thematic parties are held on New Years, Maslenitsa, and, of course, we don’t miss one of the favorite student holidays – the matriculation ceremony.

Many INS students sing in the university choir and spend time behind the chess board. There are frequent contests held among students in the intellectual sport. Students of the Institute of Natural Sciences actively participate in university events.

Choosing the SUSU Institute of Natural Sciences to receive an education is a successful start to a sustainable future!