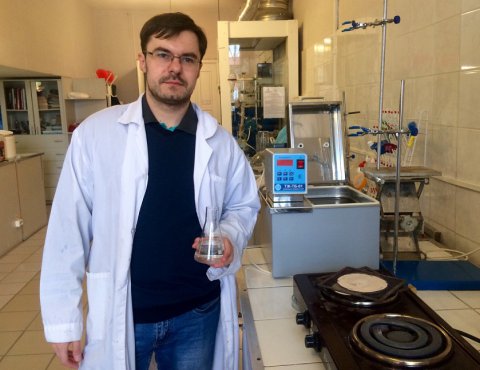 Scientists from South Ural State University have continued researching a breakthrough lay-out of Nobel laureates, who had discovered an extraordinary nano-substance, and advanced even further. Their research will allow developing an optical computer with hyperfast data transmission.

At SUSU School of Medical Biology, at the Laboratory of Perspective Materials in Biomedicine, scientists Dmitriy Kuzmin  and Igor Bychkov are researching unusual properties of graphene. This unique nano-substance is obtained from graphite, which people use practically every day – it is contained in an ordinary pencil.

"We deal with electrodynamics – this is the propagation of electromagnetic waves, specifically of light waves in nanomaterial. In our research such material is graphene – it is two-dimensional material consisting of carbon atoms, arranged in the form of honeycombs. It has a lot of non-typical physical properties, which are inherent to ordinary physical nanomaterial, such as increased strength and good conductivity. Besides, graphene is optically transparent substance and its properties are easy to manage,"  says Dmitriy Kuzmin, researcher of the Laboratory of Perspective Materials in Biomedicine at SUSU School of Medical Biology.

For the record, graphene was discovered in 2004 by Russian scientists Andrey Geym and Konstantin Novoselov, who have received the Nobel Prize for their discovery. This nano-substance has been arising great interest ever since. In 2016, SUSU scientists Dmitriy Alexandrovich and Igor Valeryevich have published 3 scientific articles dedicated to this topic in Scientific Reports and Nano Letters Journals, indexed in Scopus and Web of Science databases. It should be noted, that the scientists carry out their developments in collaboration with our international colleagues from France.

"Aside from publication, it is very important how the article is cited, how the scientific community takes it. However, being published in Nano Letters journal itself is of a great importance, because this is a journal with high impact factor. So that makes a very high possibility for our article to be noticed and read," says Igor Bychkov, researcher of the Laboratory.

In the latest publications researches from the Southern Urals are considering magnetic cylindrical structure of graphene which was “rolled” into the shape of a tube. Its principal difference is in the radius, sufficiently large by Nano life standards.

"As this material possesses good conductivity, all the energy is accumulated near the surface of material – this phenomenon is called Surface Plasmon Polariton. Magnetic field helps manage the energy distribution. Such properties haven’t been studied before our research,"  says Dmitriy Kuzmin.

In the future, such properties of graphene can allow the scientists to create an optical computer, the speed of data transmission in which will be equal to the light speed.