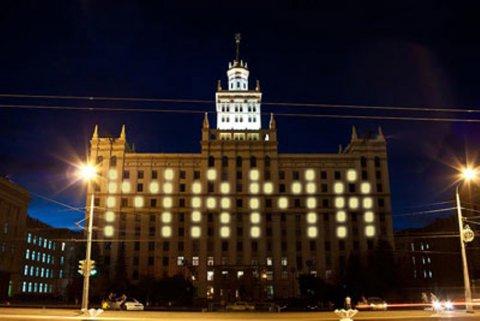 On November 27, Mother’s Day, around 60 windows will be illuminated simultaneously at the SUSU main building, writing the word “mama” in light.

Today more than 80 volunteers started to train for this event. Special mathematical calculations are being created and a scheme for turning the lights on is being developed. It is known that around 60 rooms will be used in writing the word, including the office of SUSU rector, Aleksandr Shestakova, and the height of each letter will be six floors. Parts of the windows will be covered by a special material so that the letters will be more clearly outlined.

“Staff and students of the university are carrying out great work, calculating how to turn on lights at the appointed time simultaneously so that no busted lights or delays from the circuit breaker ruin the picture. The huge letters spelling ‘mama’ will only be lit in the city’s November darkness for five minutes, but this will be plenty of time to be able to take special photos and remember how much these four, simple letters can mean to a person,” say partners of the event from Intersvyaz.

This performance will be part of a light show. A bright event is ahead for students and staff.