An English-Language Newspaper has Appeared at SUSU 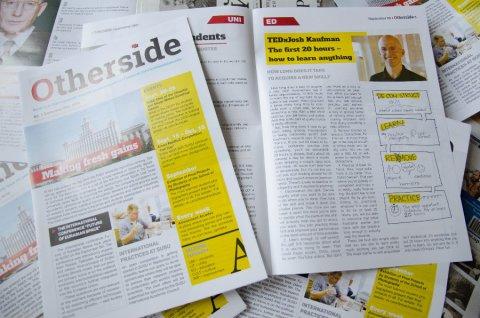 A newspaper for international students, “Otherside”, has appeared at South Ural State University. The newspaper publishes the most important news from the university and announces events that may be of interest to students from other countries.

In the first edition you can find a few important quotes from the rector about the goals of the future academic year, an educational article about how to learn anything you want to in 20 hours, and 9 of the most common Russian superstitions. All of these articles are written in English. The goal of “Otherside” is to acquaint international students with Russian culture and involve them in university life and science.

A few international students have already noted how helpful such a newspaper will be. Vice President of the Association of International Students, Alina Pavlyuk, noted that such a publication has not been released before, although there were many attempts at its creation.:

“The main advantage is that this newspaper is published in English, the international language of communication. A large number of international students study at our university, and many of them are not ready to speak Russian fluently right when they arrive in Russia. However, many of them speak English. These folks can now find out where to spend their time, where to eat, and where to go on the weekends,” says Alina.

The publication can be found at university information kiosks and university dormitories.

In addition, the newspaper is open to suggestions and questions from students. By cooperating with international activists, the editors plan on opening up the most current and interesting issues from student life.