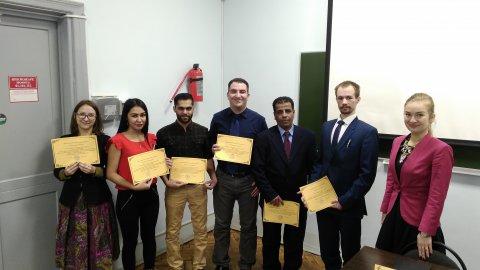 On December 28, 2015 international student round table ‘Middle East: Yesterday, Today, and Tomorrow’ was held in South Ural State University, where Arab and Russian students discussed topical issues of the Middle East region and the possibilities of cooperation of the Russian Federation and South Urals and Middle East, as well as exchanged experiences in the field of Oriental Studies.

Student discussion was the logical continuation of the international table ‘Dialogue of Russia and the Arab East in the Context of Current Geopolitical Situation’ which took place at South Ural State University in November, 2015. The round table triggered the work of the Information Center on Mutual Interaction with the Middle East. The opportunity to create such a center was discussed on November 26, 2015 at the meeting of the Head of the Department of International Cooperation of SUSU, Alexander Deev, with the Counselor for Cultural Affairs of Egypt, Dr. Atef Mohamed, and Dean of the Faculty of Eurasia and East (CSU), Galina Vladimirovna Sachko. Information Centre for Cooperation with Middle East is the first and only project of its kind in the region which will be implemented on the basis of SUSU.

The main objective of the establishment of the Center is the interaction between the students of the Russian Federation and the Middle East in the field of culture, science of student exchanges and studying abroad.

In future the possibility of cooperation of the Information Center with leading companies of South Ural and countries of the Middle East region is considered in order to attract qualified specialists on Arabic culture from Russia and experts from Middle East. Within the framework of the project special attention is paid to Arab students staying at South Ural State University.