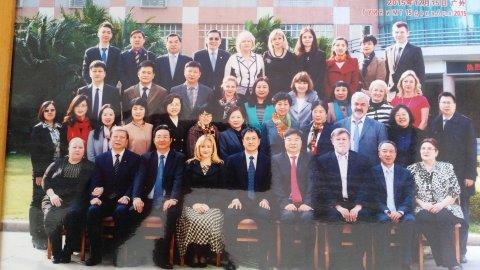 From the 14th to 16th of December the Vice-Rector for international cooperation of SUSU, Doctor of Economics, Professor Viktor Mikhailovich Katоchkov made an official visit in Guangdong University of Foreign Studies and International Trade (Guangzhou, China).

During the visit an official agreement on the entrance of South Ural State University into the International Russian-Chinese Association of Economic Universities was signed.

“At the present time economic interrelations between the Russian Federation and China have been developing rapidly”, said Vicktor Mikhailovich commenting on the results of his visit. “The issue that the universities of two countries must ‘coordinate their positions’ during the training of specialists for trade and economic space is of interest today. We and the representatives of Chinese side must speak the same professional language and solve problems that appear in external economic activity of Russia and China. That was the reason why Chinese and Russian Association of Economic Universities had been created. A membership in the Association is a high privilege and a great responsibility for economic bloc of our University. Now we have new organizational and informatory tasks. This work in prospect must lead us to new programs of double diplomas and new qualitative level of joint international educational programs in the field of Economics”.

We should also note that the inclusion of SUSU into the Association was preceded by a considerable ground work, which had been being held during the year by the Department of International Cooperation of SUSU together with the Institute of Economics, Trade and Technologies and the Faculty of Pre-university Training. During the visits to Chinese universities the representatives of our University had presented the projects of economic education and organization of work with freshman year foreign students on a complex adaptation in the University and in the Russian Federation. This work was conducted so successfully that our University in the framework of membership in the Association had been charged to coordinate a joint project of the Association on the work with freshman year foreign students of Russian economic universities. Our University adopted this honorable mission from Saint-Petersburg State University of Economics.