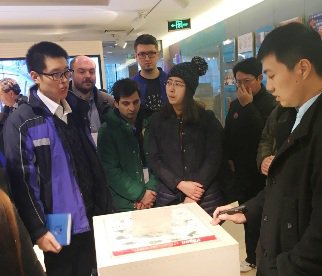 According to the participant of SUSU delegation Aleksandr Deev, the level of the development of TusPark overwhelms by its technical possibilities, as well as financial support. Today the fund of the Science Park is 50 billiards Chinese yuan. Aleksandr Vladimirovich emphasized that our University also has scientific potential for successful development of such-like structure and developments of our scientists are also held globally.

One more factor that can help to enhance the possibility of analogical science park appearance in the University is the entrance of SUSU into the program of competitive growth of Russian higher educational institutions among leading global scientific and educational centers. A number of events in the framework of “5-100 Project” are aimed at the development of science and technologies of SUSU”.

In the framework of meeting arrangement, the delegation of SUSU also visited the Ministry of Foreign Affairs of PRC. Here our representatives had a meeting with the press secretary of the Ministry of Foreign Affairs of PRC Mr. Hun Lay. The press secretary highlighted the importance of further strengthening of youth interaction between Russia and China and expressed his hope for further cooperation between the universities of Russia and China.

On Thursday, December 17 the visit was ended with the participation in Closing Ceremony of all previous years of youth exchanges between Russia and China. The Head of Russian government Dmitrii Medvedev presented at the Ceremony. The Prime-Minister emphasized that the years of exchanges must strengthen ties between the universities of Russia and China and adjust the work of student exchange programs. He also expressed his hope that close interaction between our countries at the academic level will contribute to mutual enrichment in the cultural aspect.

According to the members of delegation, participation of the representatives of SUSU in the events of such scale will open new perspectives for the development of the University’s relations at the international academic arena.