Professors of Economics and Management Faculty are the prize holders of competition "We are Chelyabinsk Region!" 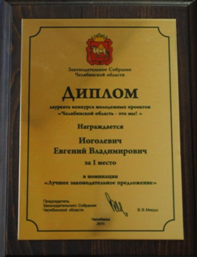 Evgeny Vladimirovich Iogolevich, Associate Professor of Economics and Finance Department, Candidate of Science (Economics), and Darya Andreevna Gromova, graduate student, became the prize holders of the competition of youth projects "We are Chelyabinsk Region!" and were awarded with the diplomas for the 1st place in the nomination "Best Legislative Proposal". This competition is held annually and its organizer is Legislative Assembly of Chelyabinsk Region. This year 173 projects have been presented within the competition.

We would like to congratulate our colleagues with the victory and wish them further success!