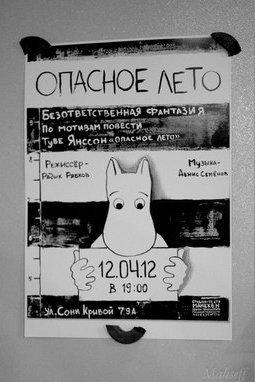 Performance "Dangerous Summer" / "Опасное лето" (directed by Radik Ryabkov) got several awards at once - Grand Prix of the Festival "Vivid Faces 2012" for the performance and Grand Prix for the actor's song (Olga Aleksandrova, actress of Stidio), also they gor the diplomas: for the best male lead (Ilya Nikulin, SUSU graduate, Economics and Management Faculty 2012), for the best female lead (Olga Aleksandrova, actress of Stidio).

December 18 and 19 at 19.00 in Studio-Theatre "Maneken" the last performances "Dangerous Summer" / "Опасное лето" of this year will take place! Hurry up!

More information concerning the Festival, performance and our actors you can see here.