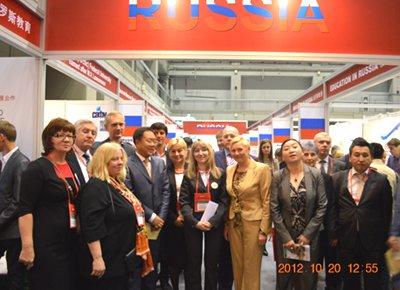 At the end of October in Beijing there was International Educational Exhibition. At that exhibition the leading universities of the world represented its achievements in the educational and scientific spheres. On two floors of the exhibition hall there were a great number of expositions of the institutions of higher education. Closer to SUSU stand there were stands of France, Italy, China and Canada universities.

National Research South Ural State University was invited by Ministry of Education and Science of the Russian Federation to participate in the exhibition.

In the course of exhibition the stand of our university has been visited by the representatives of Ministry of Education of the People’s Republic of China and a representative of Russian Embassy in China. The official representatives marked the variety and perspective of the university international programs.

While having a tour along the country the members of delegation of Russian universities were accompanied by Cui Shan, representative of Russian-Chinese Foundation for Culture and Education Development (Moscow), and Olga Filonova, Chief of Information, Advertising and Multimedia Promotion Department at Ministry of Education and Science of the Russian Federation.

During the visit a number of “frame” contracts with Chinese universities were made. In future we plan to make contracts of mutually beneficial cooperation: academic exchange of students, professors, postgraduates and also mutual scientific researches.