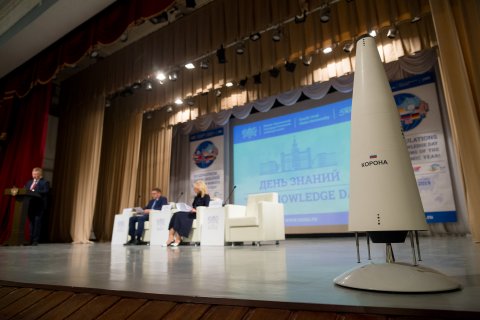 Scientists from South Ural State University in collaboration with Academician V.P. Makeyev State Rocket Centre, Miass, and Joint Stock Company Research & Development Institute of Mechanical Engineering (JSC R&DIME), Nizhnyaya Salda, are designing a unique space complex, no analogues of which currently exist. The complex comprises a single-stage launch vehicle, a platform and a spacecraft, which would allow to safeguard the Earth against asteroids. The distinguishing feature of the project is that the launch vehicle will be a “reusable” one, that is, it can be launched many times and deliver up to 7 tonnes of cargo to the Earth orbit. In addition, in the future it will provide the humanity with an opportunity to not only explore the Earth-threatening asteroids, but also help render miscellaneous space services for potential customers.

The project is related to one of the fields of work of the World-class Ural Region Research and Education Centre, which is being established in collaboration with organisations from the Sverdlovsk, Kurgan and Chelyabinsk regions. Director of the SUSU Institute of Engineering and Technology, Doctor of Sciences (Engineering), Professor Sergei Vaulin shares on this unique space complex.

‒ Why did SUSU decide to take the lead in solving the issues on protecting our planet against asteroids? Did the meteor that exploded over Chelyabinsk influence the research work of the university scientists, so that they began searching for the solution on the protection against space objects?

‒ Initially, we were planning for a strategic field related to creation of Korona launch vehicle. However, our university was also interested in such topic as asteroid security since the 2013 explosion of the Chelyabinsk meteor. According to Wikipedia, for instance, the superbolide’s entering the Earth’s atmosphere did not result in any casualties, but we know that more than 1,600 people were injured by glass shards. Multiple superbolide fragments spread over a vast territory, and the shock wave shattered window glasses and broke down doors in Chelyabinsk. The impact zone was 130 kilometres long and 50 kilometres wide. The economic damage from the meteor explosion for the Chelyabinsk Region exceeded 1.2 billion roubles. That event affected our university as well. The SUSU buildings were seriously damaged by the shock wave caused by the meteor explosion, and the total damage to the university amounted to more than 50 million roubles.

In that context, it was decided to change the title and combine the single-stage launch vehicle Korona project with the asteroid safety project. The university’s International Scientific Council welcomed this decision, as this problem is an urgent one for the whole world.

‒ Obviously, this is a problem of not just Chelyabinsk and the Ural region. This is a global-scale problem. So, which collaborations are needed to protect the Earth against meteors? What else can be done? How can international collaboration be of help here?

‒ There exist meteor security committees and international-level councils. The asteroids problem is a many-aspect one and requires special resources. For example, super-powerful high-resolution telescopes are needed. There are just a few of those in the world, and this means that to reach our goal, we could join forces, for instance, with Australia and the USA.

Moreover, we need to design a launch vehicle, which can be set ready for the launch within 24 hours. As of today, multi-stage launch vehicles can only be used for one flight while take up quite much time for their manufacture. Each such vehicle is, as a rule, manufactured for one certain mission. In case a meteor is detected, urgent measures are required to be taken, which will ensure the Earth’s safety. The single-stage launch vehicle, which we are designing, will be prepared to be launched on a mission within a 24-hours’ time, and we will not have to specifically manufacture it as it will be reusable. But before a vehicle is launched into space, a clear algorithm of actions is required, which will regulate the way to prevent a meteor’s entering the Earth’s atmosphere: whether the meteor will be shot down, or it will be delivered down so that expensive materials could be extracted from it, and we are all interested in it. To achieve that, international agreements are required, as collaboration in this field is important and promising.

‒ Could you, please, specify the university projects aimed at the protection against asteroids?

‒ Currently, we are designing a spacecraft for delivering payload to asteroids. It can leave cargo on asteroids or return it to the Earth (these could be various devices and apparatus). This project is being fulfilled as part of project-based learning launched at South Ural State University. It is also the field of work for the SUSU Asteroid Youth Design Bureau. In order to safeguard the Earth, we need to destroy an asteroid or change its flight trajectory. Moreover, there could arise a task of landing on it to extract expensive substances, which the asteroid is composed of. But to do that, it is important to learn about the detected substances and the asteroid’s path.

‒ What are the reusable Korona launch vehicle and the multi-purpose space platform in essence? What are their main tasks and competitive advantages?

‒ The vehicle is 30.5 metres high, what approximately equals the height of a ten-storey building. We decided on developing the field, which would unite a spacecraft, a space platform and a single-stage Korona launch vehicle, which can be launched using its own engines and can return to the launchpad using these same engines. There is no such thing in the world yet. Today, it is possible to return only one stage of a multi-stage launch vehicle, but the whole vehicle cannot return using its own engines, and can only be used for one flight. The fundamental difference of the future launch vehicle is that it is completely reusable and has only one stage. This innovative technology will also allow to opt out of parachute descent. This Russian space complex will in many ways be superior to its American analogue, Elon Musk’s Falcon 9. Unlike the latter one, the Russian reusable vehicle will have no stages to separate from it, as in essence, it is a single spaceship capable of taking-off and soft-landing. It will be delivering spacecrafts to the Earth orbit automatically. According to our calculations, Korona launch vehicle will cost at least three times cheaper than its foreign analogue.

This launch vehicle features a compartment holding a multi-purpose space platform, which can independently deliver objects to asteroids into deep space or to near-Earth space. 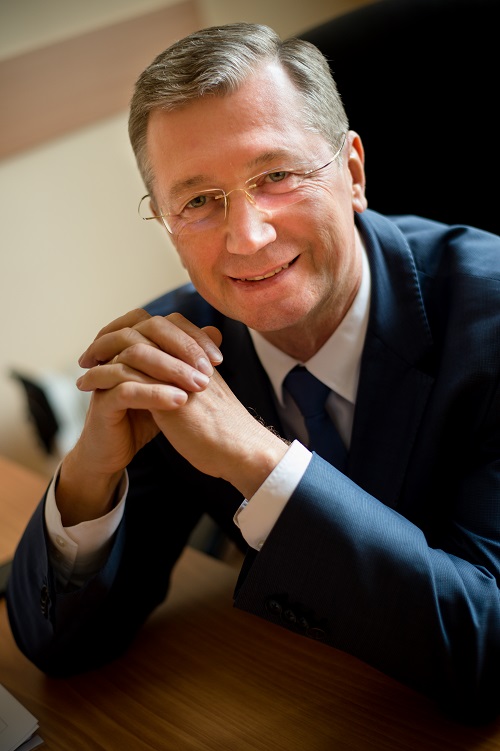 ‒ How is the multi-purpose space platform operated from the launch vehicle? How will it be fulfilling the services, and what services those will be exactly?

‒ The launch vehicle will take off from the Earth, enter the Earth orbit and place the platform into the required orbit. After that it will return to the Earth to take another flight later and, if necessary, collect the platform, which will have already served its task. The platform can be sent off into deep space, or to an asteroid to deliver a spacecraft there. The design suggests the capability to approach an asteroid quite closely, to the distance of approximately 100 kilometres. Next, a spacecraft will be launched from the platform to land of the asteroid. Having performed its task, it will take off from the asteroid and return to the platform, which will deliver it to the Earth orbit. There, another Korona launch vehicle will be waiting for it to deliver the platform and the spacecraft down to the Earth.

‒ How will Korona launch vehicle return to the Earth?

‒ Once Korona puts a platform into space, it needs to return to the Earth. It reverses for deceleration and then must perform the “nose”-down re-entry. The launch vehicle surface heats up when moving through the atmosphere, that is why the vehicle keeps turning around its radial axis. The deboosting is performed with engines and thanks to the aerodynamics of the air counterflux, the descending trajectory is adjusted with thrusters. Eventually, the landing takes place in the launchpad where the take-off was performed, and the same engines that were used during the launch are used for the landing. Three such vehicles will be sufficient to perform launches on a daily basis. Meanwhile, two more Koronas may serve as back-up in case of additional tasks or if a need to protect the Earth against a meteor arises.

‒ We are currently planning for such a collaboration in the field of composite materials. These are light-weight high-tensile construction materials. Kompozit Research, Development and Production Corporation being the leading materials research enterprise of Roscosmos State Space Corporation can become our main partner in this field. A standard approach to rocket engineering is non-reusability, that is why light-weight and strong materials are used, while durability is not required in this case. For our new launch vehicle, we will need strong, light-weight as well as durable materials.

‒ At what stage the designing is at the moment, and when will test prototypes of the launch vehicle and the multi-purpose space platform be presented? In what year is it planned to put the innovations into operation, and when will the first launch be performed?

‒ We have passed through the stage of technical proposal, and 3 variants of spacecrafts have already been designed by now. If we begin the work in 2020, a test prototype of the launch vehicle should be ready by 2028. It is planned to design the platform in 5 years, and the whole complex – in an 8-years’ time. According to the plan schedule, flight tests of the launch vehicle may be planned for 2026; however, the first flights will be performed earlier, only with the help of demonstrators, i.e. the mini-copies. First, demonstrators are created and tested, and then – the full-scale launch vehicles.

‒ Will the university provide additional training for the specialists to be creating or working with Korona?

‒ There are no such specialists as of yet due to certain specifics. But in the future, if necessary, we will be training specialists for working with Korona.

‒ How will the fulfilment of this project influence the development of Russian and world science?

‒ We need new engines, new materials and new constructions made of them, as well as control systems. In this context, big number of specialists are being attracted from various fields: mathematics, physics, technology, engineering, materials science; as well as those who deal with measuring and Big Data mining. Korona launch vehicle must be equipped with different transducers and sensors, capable of performing both self-validation and the vehicle diagnostics. These will be checking their accuracy and reporting on the condition of the vehicle, its engines and all the elements. This is a big task on measuring Big Data mining. In general, this is a new paradigm of development of the unmanned space missions sector, and this field will touch upon many spheres of scientific knowledge.