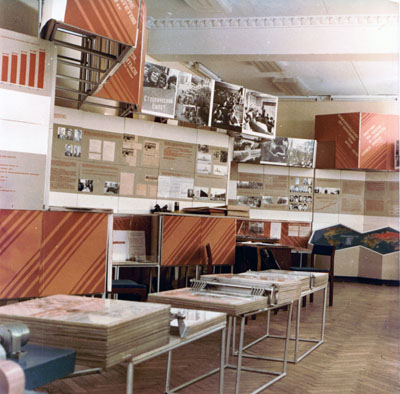 The SUSU museum was opened on February, 12, 1980.
Out exhibitions explore the information about the organization of South Ural State University, which was initially named Chelyabinsk Mechanical Engineering Institute.

World War II and the evacuation of the Kirov Plant to Chelyabinsk played a significant role in establishing the university. 20 000 Leningrad inhabitants, including the director, chief designer and engineer of the plant — Z. Y. Kotin and N. L. Dukhov. During the war the country urgently needed new heavy tanks, but the Design Bureau had lacked the professionals to work on improvement of existing armoured fighting vehicles.

In August 1942 Stalingrad Mechanical Engineering Institute was evacuated to Chelyabinsk and served as a foundation for our University. Not a single square meter of the building at that time had existed, and the university had not had yet a single professor or student. Only a decision made by the People's Commissariat of the Tank Industry enabled the selection of the University. As a result, the faculty of the university started to be selected.

P.A. Grishin was appointed as the first Director of the University. . Grishin was an Associate Professor, Candidate of Engineering Science, a professor of Stalingrad Mechanical Engineering Institute who went to Chelyabinsk in accordance with the appointment made by the Communist Party.
As early as January, 1st, the Workers' Faculty had been established and enrolled over 100 students. The first students were former school students who were not able to be accepted to a university due to the World War II and were enrolled from all the cities of the region.
On February, 1, 1944 the University was opened as a higher education institution.

A large history of the University is tightly bound with World War II as well as with many directors and professors who managed to defend doctoral and candidate’s dissertations and set the university on its feet. These events are reflected in many items of the Museum.
Gradually, these items were gathered from the professors, the Director of the University and non-governmental organizations. But in 1990 many items were lost due to a serious accident. After a long-term reconstruction and re-creating the collection, the Museum was opened again in 1995.

In 2006 a book about our faculty and staff who participated in war was published. This highly valuable book tells the history of these people who suffered, were wounded but still returned to duty.

The Museum of SUSU History exhibits the items cherishing the memory of every development stage of the University as well as the memory of the people to whom it thanks for its existence.