A Word from the Rector 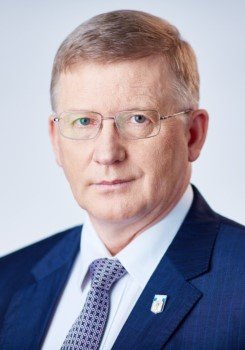 Greetings to you on this very important event, the 75th Anniversary of SUSU! The history of our national research university is testimony to the fact that it has always met the demands of the time. Since the date of its establishment the university took the path of innovative development, and through overcoming difficulties while preserving its dignity, it achieved significant results at all stages.

In 1943 Chelyabinsk became the centre of tank manufacture industry, and Chelyabinsk Mechanical Engineering Institute was established. Its first Department was called Wheeled-Track Machines, and was headed by Nikolai Dukhov, a three times Hero of Socialist Labour subsequently (a most rare case in our country’s history).

In the 50s–70s of the last century the industrial enterprises that emerged in the Ural region during the war time kept developing. To supply the sector-specialising employees to them, Chelyabinsk Mechanical Engineering Institute was transformed into Polytechnic Institute. Big faculties in all the main engineering fields were created.

In the period of reformation, which took a heavy toll on the system of higher education, our university kept steadily developing. Faculties in humanities were opened, and we started training specialists in market economy. The epoch of “stalls” ended up, but the humanities faculties at the university remained. At the same time we began developing the fields of natural sciences, which later on, during the post-reformation period, formed the SUSU Institute of Natural Sciences and Mathematics.

Thus a versatile university was formed, which preserved all engineering academic programmes, but at the same time created and developed the fields of natural sciences and humanities. And now we are striving to occupy good positions at the international level, and are doing our best to solve this challenging task by choosing the strategic vector of our development: digital transformations.

I am sure that we have many victories and achievements before us! May we reach new heights in science and education! Happy Anniversary, my friends!