The lecturers, students and postgraduate students of the Architecture Department actively participate in real project designs, including those of the University facilities that are approved by Town Planning Council at Architecture and Urban Planning Department of the administration  of Chelyabinsk. 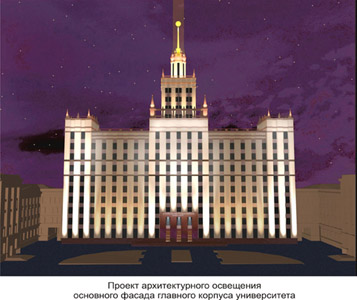 The Publishing Center, University power plant, were built according to the projects developed by the Architecture Department. The most important project, which was implemented in 2003 in the neoclassical style, is the SUSU main building reconstruction project. Before the reconstruction the main building had 7 stories without the tower part and the spire. The building immediately became the dominating structure of Prospect Lenina, the central street of Chelyabinsk,  with a total height of 86 meters.

In 2012 the project of Saint Andrew Chapel was developed. The Chapel is being planned to be built in the garden square on the opposite side of the main building of the University.

Diploma projects are developed for all federal districts of Russia, in particular, for Moscow, St. Petersburg, Vladivostok, Sevastopol, Sochi, and Uglegorsk, as well as abroad in Rome and Berlin.
A number of buildings designed by the graduates of the Faculty of Architecture  was constructed in Chelyabinsk and significantly improve the architectural character of the capital of South Urals.

The list of principal projects completed by Architecture Department from 1995 to 2011 is listed below.