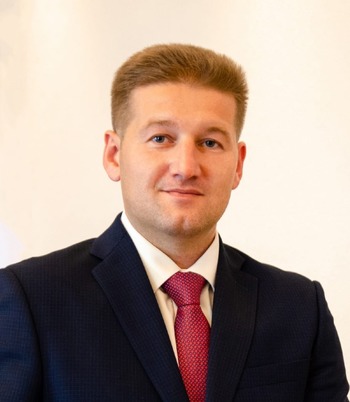 In 2006 he graduated from Tomsk Polytechnic University with a degree in Atomic Nucleus and Particle Physics as an engineer-physicist. He is a representative of the strongest scientific and pedagogical school in Siberia in the field of atomic science and technology.

In 2016, he graduated from the Management Training Programme for National Economy Organisations at Tomsk State University. In 2017, he completed the advanced training programme School of Rectors 10: Setting the University Strategy at the Moscow School of Management SKOLKOVO.

In 2009, he got his PhD in Physics and Mathematics, specialising in Instruments and Methods of Experimental Physics. After that he devoted himself to research and teaching, continuing his work at Tomsk Polytechnic University. His main area of activity was the wide application of radiation and nuclear-physical methods in medicine for the diagnosis and treatment of diseases.

Since 2012, he headed the Scientific Department of the Institute of Physics and Technology at Tomsk Polytechnic University, and continued his work at the department as an associate professor in a part-time position.

In 2014, he was elected Head of the Department of Applied Physics. During this period, a unique master's programme "Nuclear Medicine" in a network form between universities of two departments: the Ministry of Education and Science and the Ministry of Health of Russia was developed and launched at the headed department.

From 2016 to 2019, on behalf of Tomsk Polytechnic University coordinated cooperation with the world's largest laboratory for high-energy physics - "European Organization for Nuclear Research" (CERN, Geneva, Switzerland). Thanks to these efforts, Tomsk Polytechnic was officially accepted into the largest experiments at the Large Hadron Collider. This event partly determined the further trajectory of the university's development - a decision of TPU's Academic Council established a research school for high-energy process physics.

In 2017, he was appointed Vice-Rector for Educational Activities at Tomsk Polytechnic University. During this period, the university carried out a large-scale reorganisation of the structure of the main educational programmes, designed and established a programme of basic engineering training, which is the "core" for teaching students at the university in all undergraduate areas.

In 2020, he moved to Far Eastern Federal University to the position of Vice-Rector and Director of the School of Engineering. Under his leadership, the transformation of the structural unit entrusted to him into the Polytechnic Institute was implemented, which was positively received by the scientific and teaching staff, students and residents of Vladivostok.

He was awarded a commendation from the Ministry of Science and Higher Education of the Russian Federation and a Certificate of Merit from the State Atomic Energy Corporation ROSATOM.