“We Should Know the Heroes Who Gave Us Victory”: a Meeting with the Author of the Reportage “Vasiliy Zaitsev. Nowhere to Retreat” 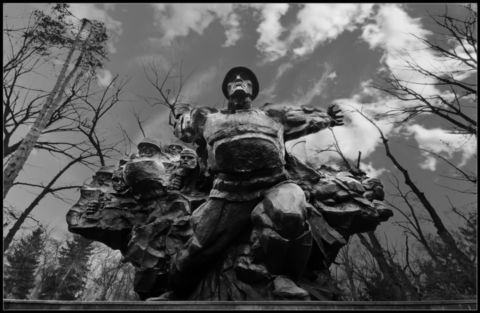 At the Department of Journalism, Advertising and Public Relations of the Institute of Media, Social Sciences and Humanities, a viewing of a special reportage of “Vasiliy Zaitsev. Nowhere to Retreat” by the correspondent of Izvestia, 5TV Russian TV Channel and REN TV, graduate of the SUSU Faculty of Journalism Vladislav Chukhrov was organized.

1st-year and 3rd-year students, who are studying journalism, took part in an online meeting.The master class started with a viewing of a special reportage of “Vasiliy Zaitsev. Nowhere to Retreat”, in which it is told about the deed of the participant of the Battle of Stalingrad, a sniper, the founder of his own sniper school and Hero of the Soviet Union Vasiliy Zaitsev. This work has been highly appreciated by viewers and media community and has won many professional competitions in journalism.

Students found out about the childhood of the legendary shooter, who taught him to hit the target accurately, and what heroic deed he did in Stalingrad.

“I think such meetings are important and much needed,”says a 1st-year student of the Department of Journalism, Advertising and Public Relations of the Institute of Media, Social Sciences and Humanities Daria Lazutkina. “Vladislav showed us a special reportage of “Zaitsev. Nowhere to Retreat” on the Soviet hero, our fellow compatriot Vasiliy Zaitsev. I believe that the topics of heroism and patriotism are very relevant in our time. We should know the heroes who gave us Victory and a peaceful sky overhead.”

After the viewing of the reportage, the participants of the master class moved on to the discussion of what they had seen. Vladislav Chukhrov told future journalists about the idea of creating a special reportage, the specific features of writing scripts for this kind of journalistic works, as well as the difficulties the journalist faced during the process of filming.

The speaker of the master class, Vladislav Chukhrov, graduated from the SUSU Faculty of Journalism of SUSU in 2015, worked as a correspondent and editor on the OTV TV channel and received the Journalist of the Year award in the Chelyabinsk Region in 2020.