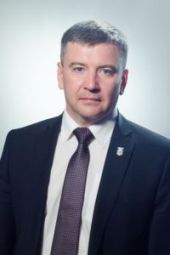 Scientific area of Professor Aleksandr Diakonov is simulation stochastic modeling of high-speed and super-speed metal-working manufacturing of modern materials with the use of supercomputing. His career Aleksandr Diakonov started as a serviceman of machine tools with numerical control, a process engineer, a research engineer at the industrial enterprises of Chelyabinsk such as LLC «FSUE “Stankomash”, LLC “Ural research Institute of abrasives and grinding”, ZAO “NIIIT – experimental plant”, LLC “ChTZ – URALTRAC”. Nowadays Professor Aleksandr Diakonov is one of the founders of the development and application concept of CAE-programs of technological assignments for high-tech and science absorbing industry.

Aleksandr Diakonov actively implements the results of scientific researches in the field of Metalworking and methods of end-to-end digital production into educational process of undergraduates of the University.

L. V. Shipulin defended his thesis on the problems of developing methods of projecting operations flat grinding the periphery of the circle on the basis of the integrated simulation process under supervision of Professor Aleksandr Diakonov in 2013. Currently he supervises preparation of 1 doctoral and 5 PhD theses.

Aleksandr Diakonov takes an active part in international conferences, among them World Congress on Engineering and Computer Science (San Francisco, United States), Source of the Document Mechanics of Composite Materials and others.

Professor Aleksandr Diakonov has published over 200 scientific publications as author and co-author of monographs about problems of simulation stochastic modeling of high-speed and super-speed metal-working manufacturing.

Professor Aleksandr Diakonov is a member of expert Council of higher attestation Commission at the Ministry of education and science of the Russian Federation, member of the expert Council for import substitution under the government of the Chelyabinsk region.

Being a well-erudite person, Aleksandr Diakonov has a very rare hobby – bird-hunting, i.e. he collects and teaches Russian Canary some singing.